Deadly Spaghetti: The Goodest, the Baddest & the Ugliest Italian Westerns Ever Made

Title: Deadly Spaghetti: The Goodest, the Baddest & the Ugliest Italian Westerns Ever Made 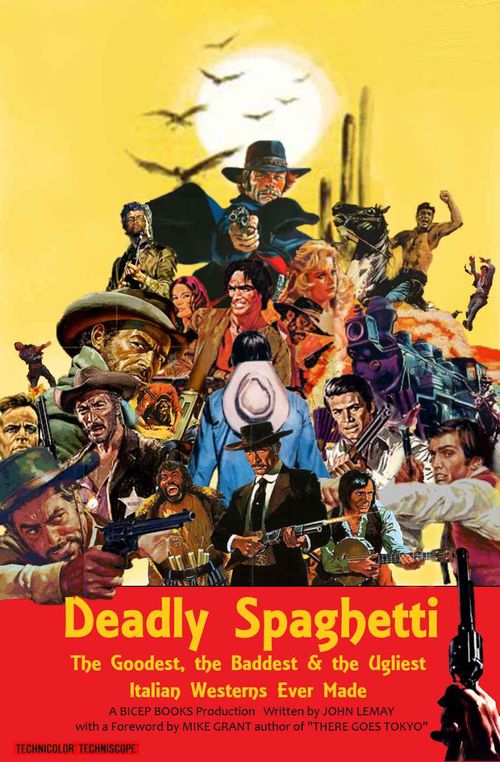 Description: Throughout the 1960s and 1970s the Italian film industry cranked out over 600 "Spaghetti Westerns"- and for every Fistful of Dollars were a dozen pale imitations, some of them hilarious. Many of these lesser known Spaghettis are available in bargain bin DVD packs and stream for free on Amazon Prime. If ever you've wondered which are worth your time and which aren't, this is the book for you. Decipher the meaning of "April Morning" and see Lee Van Cleef bust a rap in Captain Apache! Check out the original Shanghai Noon in the form of the Shaw Brother's co-production Blood Money. Puzzle at the Acid-induced Hippie Western Matalo! See hearts ripped out of chests in The Fighting Fists of Shanghai Joe! Thrill to William Shatner in dual roles in White Comanche! Visit Robert Shaw, Telly Savalas and Martin Landau in A Town Called Hell! Split a few heads with Bud Spencer in Massacre at Fort Holman! See faces melt and Giuliano Gemma shoot down Aztec sorcerers in Tex and the Lords of the Deep! And watch Django go bananas in tropical Mexico in Django Strikes Again!

I'll admit something here that no other author ever will: a lot of people are probably going to hate this book. It's patented after Mike Grant's There Goes Tokyo, a humorous tribute to Toho Godzilla films that many fans were upset by (not me, I take Godzilla films 100% seriously and yet I loved it!). Hopefully this tome will do the same for Spaghetti Western lovers. I absolutely love Spaghetti Westerns by the way,and take most of them (or, the good ones) 100% serious. If you're curious what I consider to be a good Spaghetti among my favorites are Once Upon a Time in the West' RunMan, Run!; Companeros; and The Great Silence. I do not, however, love many of the bad ones reviewed in this book--movieslike Matalo! and Beyond the Frontiers of Hate. The former is too far out, and the latertoo boring for my tastes--but both are hilariously inept. Then there's a few strange Spaghettis like Captain Apache and Blood Money (both starring the legendary Lee Van Cleef) that I liked very much but still found to be bizarrely humorous. And if you can't see the humor in a tone deaf Lee Van Cleef singing the Captain Apache theme song then I really don't know what to tell you. And then there's even one or two Westerns that are little too good to be included in this book--looking at you Keoma and The Hellbenders--but most of them are plain awful and deserve a good lampooning. Now, does that mean you will you enjoy the book? That depends on your twisted sense of humor I suppose. But, if nothing else, it made myself and Mike Grant laugh (I think)--and I had a ton of fun writing it. And for the one or two people who actually give this book a good review, thanks for sharing our sense of humor. It's not for everyone.

P.S.--A few of the grammatical errors and poor phraseology and run-on sentences are actually there for artistic effect, it's not because I didn't have the luxury of an editor this time around.

P.P.S.--One of the more astute reviewers of one of my other books here on Amazon suggested playing a drinking game for every time I use the word "Surprisingly" in the text. This time around I also decided to overuse the terms "All in all" and "Overall" throughout the text, so be on the lookout and have those shots of whiskey handy!

Retrieved from "https://www.spaghetti-western.net/index.php?title=Deadly_Spaghetti:_The_Goodest,_the_Baddest_%26_the_Ugliest_Italian_Westerns_Ever_Made&oldid=110101"
Category:
Cookies help us deliver our services. By using our services, you agree to our use of cookies.