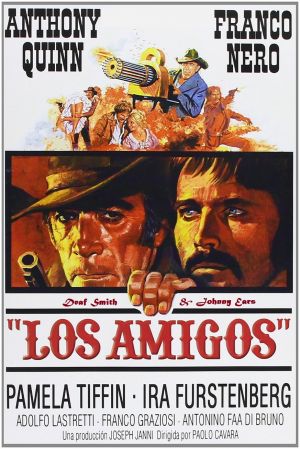 The only spaghetti western by director Paolo Cavara, best known for his shockumentory Mondo Cane (1962). The story is set in 1836 Texas. Anthony Quinn plays a deaf and mute gunslinger, called Erastus “Deaf” Smith, who works as a spy for governor Sam Houston, while Franco Nero is cast as his comical sidekick and ‘ears’ Johnny, a Mexican of dubious descent (to prostitutes he says he’s from Spain, but apparently that’s what they all say!).

History buffs and Texans might be aware of it, but to most others it will come as a surprise that Quinn’s deaf spy was based on a historic character, who owned his knick-name “Deaf Smith” to the fact that he had lost his hearing due to a childhood disease; however, according to some sources the hearing loss was only partial and he was not a mute (*1). Nero’s character was made up entirely. The movie is an odd mix of styles; the massacre at the MacDonald ranch is quite graphic and the grand finale, set in an army fort, is equally energetic and brutal, but in-between we get a lot of scenes with Nero in comical overdrive. Nero can be very effective when playing a cool, taciturn hero or an ultra-cool, sophisticated mercenary, but comedy was not his thing. He is yelling, jumping around, playing a type with two ears but no brains at all: he falls in love with a whore, but is shocked when he finds out that she has costumers (!). Quinn, on the other hand, is excellent as the handicapped spy and director Cavara cleverly illustrates his situation by presenting the scenes shot from his perspective without sound; those moments are very functional, giving us, for a moment or two, the idea that we are Smith, and are deaf. Nero’s comedy capers don't pay off, but there’s a funny reference to his Django days when he’s confronted with a machine-gun and doesn’t know how to handle it!.