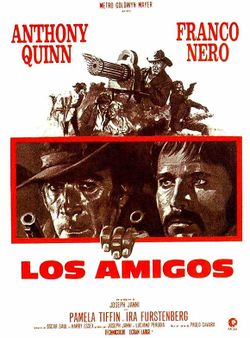 An fairly enjoyable entry in the subgenre of spaghetti westerns featuring an unlikely pair of heroes. Anthony Quinn is Deaf Smith, a deaf spy on a mission in 1836 Texas, Franco Nero is his pair of Ears. The opening and the finale are quite violent, but in-between we get some inadequate comedy, delivered by Nero in overdrive. Tonino Delli Colli’s cinematography of the Spanish landscape is breathtaking.

The only spaghetti western by director Paolo Cavara, best known for his shockumentory Mondo Cane (1962). It’s a fairly entertaining entry in the subgenre of spaghetti westerns featuring an unlikely pair of heroes. The story is set in the 1836 Texas, just after it had won its independence from Mexico. Anthony Quinn plays a deaf and mute gunslinger, called Erastus “Deaf” Smith, who works as a spy for governor Sam Houston, while Franco Nero is cast as his comical sidekick and ‘ears’ Johnny, a Mexican of dubious descent (to prostitutes he says he’s from Spain, but apparently that’s what they all say!).

History buffs and Texans might be aware of it, but to most others it will come as a surprise that Quinn’s character of the deaf spy was based on a historic character, who owned his knick-name “Deaf Smith” (Deaf to be pronounced as Deef) to the fact that he had lost his hearing due to a childhood disease; however, according to some sources the hearing loss was only partial and he was not a mute (1). There are no traces of a partner delivering an extra pair of ears, so Nero’s character was most probably made up entirely. The script, based on a story by two Hollywood veterans, Harry Essex (The sons of Katie Elder) and Oscar Saul (Major Dundee) is well-constructed and quite lively but it doesn’t dig deep into the matter of Sam Houston’s plans or the motivations of his opponents; there are a few rumors about German fundings an dictatorship, but that's about all: this is not a political movie.

Originally it was intended to be an action spectacle spiced with some tongue-in-cheek humor - modeled after Corbucci’s Zapata westerns - but the producers wanted it to be more light-hearted. The result is an odd mix of styles; the massacre at the MacDonald ranch is quite graphic and the grand finale, set in an army fort, is equally energetic and brutal, but in-between we get a lot of scenes with Nero in comical overdrive. As we all know, Nero can be very effective when playing a cool, taciturn hero or an ultra-cool, sophisticated and cynical mercenary, but in this movie he has a shot at slapstick, yelling, jumping around, playing a type with two ears but no brains at all: he falls in love with a whore but is shocked when he finds out she has costumers. That’s not cool, that’s plain stupid. Quinn, on the other hand, is excellent as the handicapped spy and director Cavara cleverly illustrates his situation by presenting the scenes shot from his perspective without sound; those moments are very functional, giving us, for a moment or two, the idea that we are Smith, and are deaf. Nero’s comedy capers don't pay off, but there’s a funny reference to his Django days when he’s confronted with a machine-gun and doesn’t know how to handle it!.

Los Amigos isn't bad, but like most spaghetti westerns of the first half of the Seventies with a decent budget and a good cast, it misses this je ne sais quoi when compared to the movies from the glory years; it's still okay, but the magic is no longer there. And I had the idea it would have been better if they had followed the original plans and omitted the slapstick. The score by Daniele Patucchi is, like the movie itself, a mixed affair, alternating dramatic moments with more upbeat themes; The Ballad of Deaf and Ears, sung by Ann Collin, reminded me a little of the spiritual rock operas from the period, such as Godspell or Jesus Christ Superstar. The film best reviews went, for all the good reasons, to Tonino Delli Colli’s magnificent cinematography of the Spanish landscape.