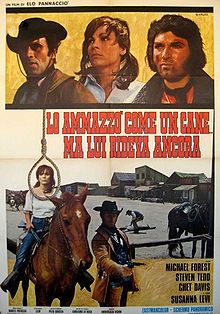 If you think the English title is intriguing, what to say about the Italian one, which translates as She killed him like a Dog … but he was still smiling. The ‘Death’ from the English title is a Mr. Death, a black-clad gunslinger called Kimble, a former cattle rustler who fell out with his partners in crime because they had turned into a gang of murderers and rapists. The title is a reference to his musical instrument, the flute: like Harmonica, he plays when he’s supposed to talk. Explaining the Italian title would be too much of a spoiler. It will be clear after you’ve watched the movie.

Kimble, who has become a bounty hunter after he has left the gang, runs into a farmer called Burton, whose ranch was raided while he was away from home. Burton’s father and wife were killed and his daughter Suzy was viciously raped; she survived the massacre, but now lives in a semi-catatonic state. Kimble tells Burton he might be able to identify the murderers and is therefore hired by the farmer to accompany him on his quest. The murderers were of course Kimble’s former gang members, and he actually witnessed what happened that night …

The premise of a man looking for the murderers of his family, who is joined by a former gang member who was present on the scene of the crime, is of course lifted from Death Rides a Horse. However, the master-pupil element, essential to Petroni’s movie, is not used here, and the end has been changed drastically. With his leather coat and side-whiskers in the style of Mungo Jerry, our Mr. Death looks very much like a hippie lost in the West. Most probably he was dressed (and made up) to look like Elvis, who was still good-looking around this time, and sporting similar side-whiskers. Anyway, his anachronistic appearance contributes to the outlandish atmosphere of the movie. It’s bizarre, violent, perverted – but hey, before you start looking for a copy, you’d better realize that it’s also sloppy and incoherent, even ramshackle. Understandably it has divided fans of the genre. 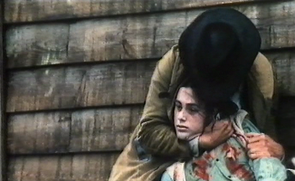 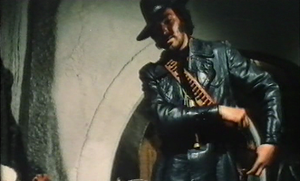 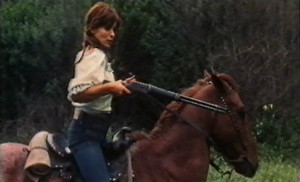