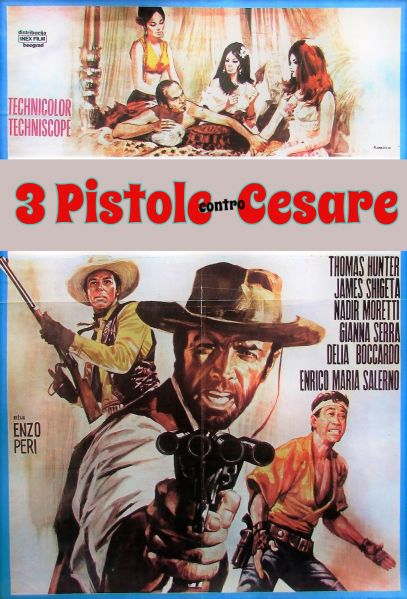 In the opening scene a cowboy named Selby is accused of cheating and challenged to a duel by the four men he had beaten in a game of poker. It's a scene that looks like dozens of other scenes from spaghetti westerns, until Selby pulls out a four-barreled gun and shoots all four opponents with one single shot. We're not only supposed to believe that this fantasy gun works, but also that it can shoot in four different directions at the same time. This is western wonderland ...

Selby is approached by a solicitor who tells him that his father (whom he had never met) has left him a goldmine, located in a place called Laredo. Selby receives an official document plus a photo of a young girl. In Laredo he discovers that two other young men have received the same message, document and photo: the two others are his half-brothers, sons of the same father but a different mother. The first one, Kato, is Japanese and a martial artist, the second, Devereaux, is French and a hypnotist who beats his opponents by freezing their trigger finger or hammering fist. The three team up and start looking for the goldmine and the girl on the photo, but they're thwarted by this would-be Roman emperor and his private militia of black-clad pistoleros ...

The movie was a personal idea of producer Dino de Laurentiis, who was fascinated by the success of Leone's A Fistful of Dollars and wanted to copy (or even double) it by producing a western that was at least twice as extravagant. As far as I know it's the only spaghetti western that was shot in Algeria and I guess it's also the only one to feature a villain called Julius Cesar Fuller, a lunatic who lives in a imperial palace, located on a hilltop and has surrounded himself by a harem of young girls from all four corners of the world, and a praetorian guard of black-clad pistoleros (played by Algerian extras). If that's not enough reason to watch the movie, there are a few others, such as Femi Benussi performing an erotic dance and a catfight with two girls ripping off each others' clothes ...

The black-clad pistoleros reminded me a little of the black-clad muchachos of that other ultra-weird spaghetti western extravaganza, Fabio Questi's Se sei vivo spara (Django Kill), but the atmosphere of this movie is entirely different: I did not spot any homosexual overtones and it’s nowhere nearly as perverted or violent as Questi’s movie. The body-count is pretty high but the tone is tongue-in-cheek, occasionally even cheerful. According to Marco Giusti, the idea for the Roman palace was taken from Rio Conchos, a popular movie in Italian cinemas at the time (*1). Salerno is almost unrecognizable (actually I didn't recognize him) as the emperor, but like the other actors he seems to enjoy himself. This is by no means a great movie but it's quite lively and most certainly has some curiosity value. 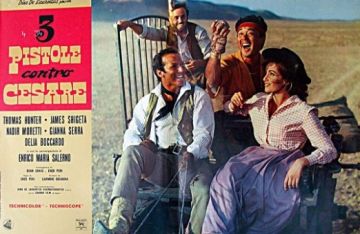 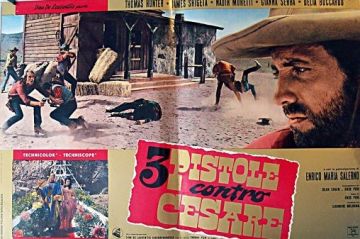 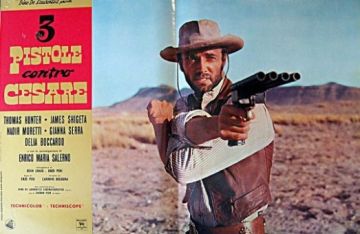 Simon Gelten is a long time contributor to the SWDb. "I'm not as old as Tom B. but I'm working on it. I hope to catch up with him by the end of the next decade.", he says. Simon saw all movies by Sergio Leone and several by Sergio Corbucci in cinema, most of the time in Eindhoven, the city where he was born. Currently, Simon is living in Turnhout, Belgium. Simon is active within the database as both Scherpschutter and his alter ego Tiratore Scelto.
Retrieved from "https://www.spaghetti-western.net/index.php?title=Death_Walks_in_Laredo_Film_Review&oldid=113595"
Category: