Difference between revisions of "Degueyo" 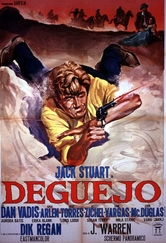 Ramon and his bandit gang launch an attack on Danger City, searching for rumoured hidden treasure and unable to find the loot either kill or take as hostage all the men, leaving only the women and children to produce the treasure or face 'Deguello' - an attack with no quarter. Four men arrive in town searching for a former Confederate States Army colonel and agree to help protect the town from the bandits.

A good example for an ok western which would have benefited from a bigger budget, a few more days of shooting, and a bit more thinking about the basically good story. Our hero (Rossi-Stuart) is pretty bland while Dan Vadis is very effective as villain. I think Giuseppe Vari would have done better with the screenplay if he had shot it 2 or 3 years later. Apart from director Vari it marked also the SW debut of Sergio Garrone, who maybe was in the personal union of producer and co-screenplay writer one of the creative forces behind this film.