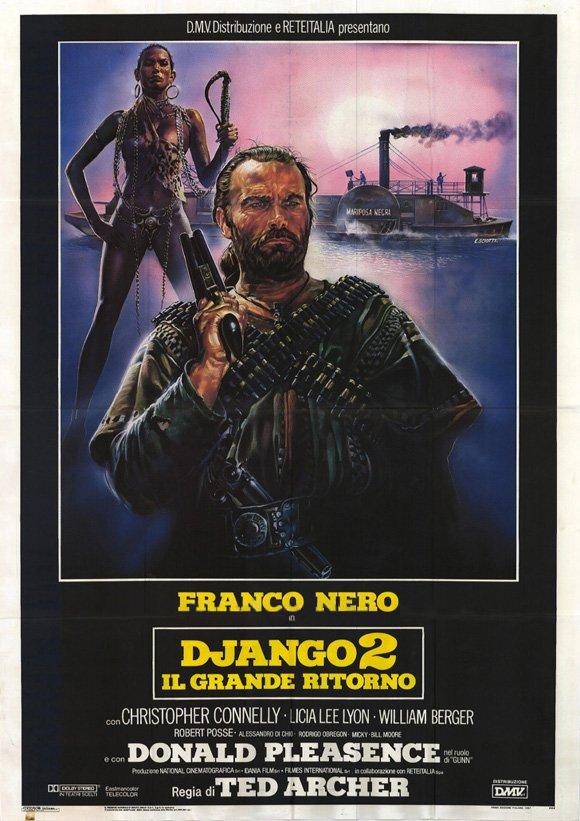 Django was a successful and highly influential "spaghetti western," spawning over 30 pseudo-sequels that borrowed the name and the main character's bloodthirsty ways, but Django 2: Il Grande Ritorno (aka Django Strikes Again) was the first follow-up to feature Franco Nero reprising the title role from the original film, and the only one made with the participation of the director of Django, Sergio Corbucci (though only in an advisory capacity.) In this story, Django (Franco Nero) has spent a decade in a monastery, trying to live down his violent past as a gunman. However, Django is forced to renounce his vows when word gets back to him that a villainous slave trader, Orlowsky (Christopher Connelly), has kidnapped his daughter. Enraged and determined to bring the abductors to justice, Django digs up his old Gatling gun (literally - he had buried it in a graveyard, under a headstone with the name "Django" on it) and once again begins cutting a swath through the countryside as he seeks to free his daughter. Django 2: Il Grande Ritorno also starred Donald Pleasence, William Berger and Robert Posse; some prints are missing a five minute prologue sequence.