Review of the 2012 Blue Underground BluRay release of Giulio Questi's Django Kill... If you live, Shoot!. Which was overdue for a review on the SWDb and it has been sitting on my shelf for too long. 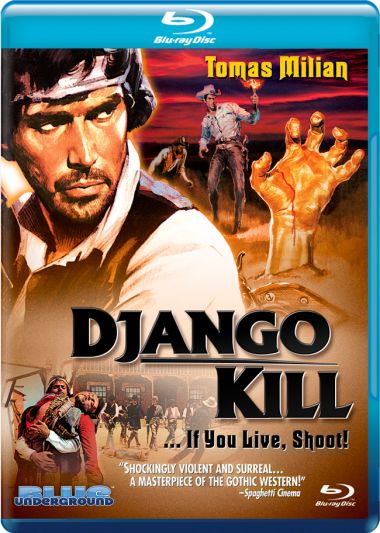 Oaks (Piero Lulli) and his gang rob a gold transport. He is however too greedy to split the gold, so he shoots his partner the Stranger (Tomas MIlian) and some of the gang and leaves them for dead. He is rescued by two Natives and bring him back from the dead so to speak, and turning some of the gold he had with him into bullets. The Stranger meanwhile and the surviving handful of gang come into the next town, which seems like the most miserable hell hole, where they want to buy horses and supplies. But they haven't figured in the cunning of the townsfolk, who get real mean after they realize the amount of gold the gang is carrying. The Stranger arrives in the place just when Hokes' gang meets its demise and is about to put an end to the gang boss himself. When The Strangure manages to shoot and caputre Oaks for them, the town's real boss appears: Sorrow (Roberto Camrdiel). When they dig the bullets out of Oaks' body that The Stranger put in there, they discover gold, and while rivalry between the townfolk, barman Templar (Milo Quesada), Sorrow and other string pullers breaks out, the gold goes missing....

At about 116 minutes running time (in this version some scenes remain in Italian and are subtitled), the movie may not be very long compared to a few others, but it certainly feels long. If you're alive, kill (which would be the literal translation of the title that has been changed to something with Django by the distributors back then even though the movie has nothing to do with Django) is a very brutal (and violent for its time), sadistic and somewhat experimental film. It's Questi's only western, and it turned out to be one with slightly gothic, quasi-religious, political and homo-erotic elements. A potent mix that shocked audiences at the time and still today makes it one of the more peculiar entries in the genre. It doesn't stick much to convention and turns a nightmare scenario, moral confrontations and the western setting into a hellish allegory on greed, guilt, sadism and justice.

Giulio Questi, also known for some weird Gialli, had some capable collaborators on this one, and he also won over Milian. But, as I said before, it feels a bit long. Despite these collaborators, the script feels weak, and especially the last third of the film seems all over the place, draggind on and it lost me as a viewer. Now, there are two reasons for that. One is that the movie is chuck full of meaning, artful compositions and carefully constructed scenes. Watch these without complete concentration or focus and a main part of what makes this movie gets lost on the audience. The other is that Milian's character isn't the central protagonist, and the script and director do a terrible job at telling a cohesive dramaturgically logic story, which lets the movie fizzle.

Django Kill offers a bit of a nighmare scenario for all protagonists. presents a dreamy atmosphere in a bad way so to speak, and wraps it in expert craftsmanship, great editing and production design, and also good acting. While it doesn't offer the greatest English dubbing, it's certainly, in all respects, a very top notch production light years ahead from most of the assembly line trash westerns that were shot at the same places by much of the same people. There is greeat camerawork of course, from impressive closeups and pans to complicated compositions, there is amazing editing, good music, stunts, choreography, and more. The movie takes place in few locations, but these are very convincing and well made set pieces. Make no mistake, as weird as the movie is, all in all this is an extremely well crafted movie that just lacks a bit in the dialogue and screenplay department and feels slightly too artsy in a few spots, but its qualities are obvious.

Once you look past the above deficits of the film, and if you really put up the effort and actively watch it, there is a lot in this fim for analysis. Questi was an intellectual director, and there is hardly a scene or aspect of the film that isn't burdened with meaning. Take for example Templar's rival Alderman (Francisco Sanz) and his supposedly mad wife Elizabeth (Patrizia Valturri). This is one that has puzzled me, not only because on first glance this entire part of the story is rather useless, but also because here you have a minor female role that is more important to the one that got top billing. Alderman is one of the main string pullers and just as much after the gold, for some reason he manages to get the stranger more or less on his side, but that goes sideways soon. And not ust because he starts fucking his wife without that ever kind of becoming a big deal. On second glance however, it is an additional layer of depravity that has befallen this town, in addition to all the greed, jealousy, violence and other wickedness. As it tunrs out, the STranger is just what was needed to tear this corrupt town apart. And even though he is depicted as a quasi Jesus figure, he is a long cry from innocent himself.

The BluRay offers two main audio options: both the English dub and the Italian dub are included as DTS-HD mono tracks. You can pick from a few subtitle options, the obvious choice being English for the Italian track, but there is also an English SDH option, plus there are French and Spanish subtitles. I tested the English track for this review, and I have to say while it is not a knockout, it certainly sounds totally fine for all its ends and purposes. The transfer looks nice as well, they did a marvellous transfer from a well preserved print of the film. For today's standards, the use of DNR is already a bit much, but it's a perfectly fine looking transfer with nicely saturated colors and texture, good contrast and sharpness.

There aren't that many extras included, but they add another half an hour of diving into the movie and its context. There's "Django, Tell!" which consists of interviews with Giulio Questi, Tomas MIlian and Ray Lovelock. It runs at 21 minutes and is a super interesting featurette with lots of fascinating facts about the film and charming interviews from the three who remember these days really well. There is also the theatrical trailer and a poster and still gallery.

All in all, a highlight in the genre, albeit a weird one. The movie belongs in every collection and this disc is as good as it gets, if it is ever re-released the only hope would be that the material is used for a presentation with less digital touchups and a tad more pristine resolution. I am sure more extras could be dug up as well. Recommended!