The title says it all, this movie is supposed to have the two most legendary Spaghetti Western anti heros in the same film. The only problem with this great idea is that it has three rivals (at least in german). As you might also hear in the title is that this is the kind of film that Fidani could make (actually, he made two of this films rivals). It is not as crappy as the Fidani westerns, but it's crappy.

The script is the worst thing about this movie cause it doesn't deliver much of a story. However, the "story" is this: Django's brother Steve is given a mission, which is to give Sartana 3000 dollars, because the bank owner thinks Sartana is a bank robber. But Sartana is no bank robber so he gives the money back to Steve. Later, Steve is lynched for a bank robbery he never commited. Django belives that the real bank robber is Sartana so he challenges him to a duel. Then Sartana tells him that he isn't the real robber so they team up to find the real robber, which is the banker himself!

This was cult actor Tony Kendall's first Spaghetti Western, George Ardisson's fourth, director Pasquale Squitieri's second movie of all time, so the most skilled credit in this movie is José Torres, who had already made a couple of Spaghetti Westerns, so you understand this is kind of an amateur western. 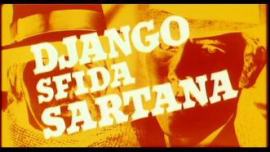 As mentioned above, this film is crappy, but not bad. It's an entertaining flick, and it's great fun. But it has flaws, too. For example, it has an extreamly low budget, and, there is nothing wrong with that but it's made in B-movie style. This could be the directing, it could be the script, it could be the light or anything else. It's just a special feeling that Fidani had in most of his films. Sometimes it's also hugely overacted. The settings are B-movie too. Piero Umiliani takes his job seriosly and makes a fine score (even though some songs are from "Son of Django").

Not sure if my version is cut, but I think it is, because there really aren't no brutalities.

I have a DVD-R version of this film, which is ok but it's VHS quality.

My name in the forum is Silence if you want to contact me.