Django is everywhere this year. With Quentin Tarantino's Django Unchained, which pays especial homage to Sergio Corbucci's Django and includes a cameo appearance by Franco Nero, thousands across the globe are rediscovering the classic. We're taking a closer look at the film, its background, involved people, and of course DVDs, BluRays and soundtracks of the film. Enjoy 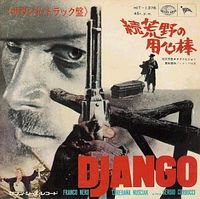 Get it now (only one version linked, see links on the left for overview pages)

2013 is the year of Django!
On January 5h, 2013 Quentin Tarantino received a special award at a ceremony of the Rome Film Festival. The award was handed to him by none other than Ennio Morricone. Franco Nero, who played Sergio Corbucci's original Django, was in attendance. He also has a cameo appearance in Quentin Tarantino's 2012 homage epic Django Unchained which gets released to theaters worldwide in mid-January of this year. DVD and BluRay companies around the globe are already trying to jump on the Django train - and that's a good thing. Again, Tarantino helps the spaghetti western world with an attention push. Koch Media for example is releasing the Western Unchained collection, a selection of films from his favorites list (which is an SWDB exclusive) as well as from films he screened at the Venice Film festival before. Two of them get the BluRay treatment. Tarantino's movie will attract some much overdue attention to these classics, by a whole new generation of audience, and it is good to see the original Django coming to theaters in the US, to BluRay in the UK, to France and German (again) on DVD, and so many other spaghetti westerns also benefit from rekindled love for the spaghetti western.
Click here to read a review of Django Unchained at tararantino.info, click here to read a review of Django Unchained at furiouscinema.com