Fifteen Scaffolds for a Killer Review 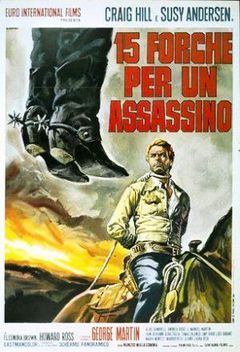 The only spaghetti western by Nunzio Malasomma, a 73-year old director who had only made a handful of movies (mostly romantic comedies) over the past twenty years and had no prior experience with the western genre. His movie is uneven and badly edited, but it's also gritty and has a fine cast.

Martin is the leader of a gang of horse thieves, Hill his rival, put on his trail by one of Martin’s victims who wants his horses back. The two men make a deal and their gangs spend the night together in a barn next to the farm of a widow with two young daughters. The next morning the forthcoming husband of one of the daughters discovers the bodies of the three women, who were raped and killed. A lynchmob - organized by the sheriff and a protestant pastor (a pretty uncommon character in a spaghetti western) - starts chasing the two gangs, who are held responsible for the killings. Martin and Hill kidnap the pastor's wife and while they take refuge inside an abandoned fort, the scaffolds from the title are erected outside the fort …

With a De Masi score, Raoul singing the theme song, Stelvio Massi operating the camera and one of the more original scripts in the history of the genre, Fifteen Scaffolds for a Killer seemed destined to hit bull’s eye. Furthermore Martin turns in a solid performance as a gallant thief who combines chivalrous manners with unexpected violent outbursts (and for the ladies fancying him: he repeatedly shows his impressive upper part of the body). But big names and good performances don't make a great movie. If we were ever to create a special category for genre entries not living up to their potential, this would be my nominee. People who saw the international version, running 85 minutes, have been complaining about bounds and cuts, and nourished great hopes that a longer version would be more consistent. I saw the Jerski version, a fandub of the Spanish disc, running 1 hour and 36 minutes; it's probably the longest version available, but still looks jumpy, as if it were edited with a hacksaw.

Despite the grittiness, the release date, and the familiar faces from the Dollar movies, Fifteen Scaffolds for a Killer has the strange, old-fashioned feel of those early Spanish pre-Leone westerns. There are some shades of American movies like The Ox-Bow Incident and The Bravados as well. There are some good scenes (especially in and around the fort), but there's also a lot of riding around (some scenes used more than once to fill gaps in the script) and the rivalry between the two gang leaders is underdeveloped. We soon understand that Hill and Mare are innocent and some tension is created about the identity of the killer. When his identity is exposed, he’s not brought to justice, but driven into the fort, so the men inside, unjustly accused of his crimes, can take care of him. They do, in an abrupt, and very effective scene, but then we’re treated to a sort of ‘end after the end’, and fairy tale like coda in which we’re told that everybody (not yet killed in this case) lives happily ever after. It feels totally wrong.

Two gangs of horse thieves are accused of rape and murder and persecuted by a bloodthirsty lynch mob. They kidnap the wife of one of the leaders of the mob and take refuge in an abandoned fort. While the fort is sieged, the scaffolds of the title are erected in front of the entrance gate. This grim movie has an interesting premise, but can't live up to the expectations. It is interesting, but there are too many bounds and inconsistencies.

Retrieved from "https://www.spaghetti-western.net/index.php?title=Fifteen_Scaffolds_for_a_Killer_Review&oldid=115077"
Categories:
Cookies help us deliver our services. By using our services, you agree to our use of cookies.