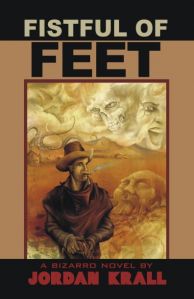 Until I received an e-mail from author Jordan Krall asking if I were interested in reviewing his new bizarro novel that is a tribute to the spaghetti western, I hadn't even heard of the blossoming genre known as bizarro fiction. What's bizzaro? According to the things listed in Bizzaro Central's (the go-to hub on the web for all things bizzaro) What is Bizzaro? page:

Got that? Now, take all that, and apply it to your spaghetti western with all of the conventions and archetypes we're accustomed to in the genre, and that's Jordan Krall's Fistful of Feet. Krall had sent me his other works, Piecemeal June and Squid Pulp Blues as well, to give me a familiarization with the genre (a genre that contains titles such as The Haunted Vagina, Ass Goblins of Auschwitz, and Meat Puppet Cabaret) After reading the seriously depraved Piecemeal June, I felt like I needed to take a very long shower, but I found it a rather twisted, entertaining read, as did I with Squid Pulp Blues. After those assaults on my senses and boundaries of taste, I was looking forward to Fistful of Feet, Krall's first full-length novel.

Part one of the book, entitled "Dig Your Grave, Calamaro is Coming", starts off with our quintessential stranger in town, named Calamaro (Krall has an obsession with squid in all of his works, as well as women's stinky feet) dragging behind him a wooden donkey, named, of all things, Sartana. He's heading into the town of Screwhorse, Nevada, a place where the cows have tentacles instead of udders, and the local whorehouse caters to the bizzarest of its clients' fetishes (such as a prostitute with four feet). The plot and characters capture the essence of spaghetti to a tee; there's the madam with a heart of gold, the dapper card cheat, a bad town boss with his ruthless henchmen, people searching for gold, you name it. Calamaro is a mysterious loner, like the one we've seen so many times, and he even has the murdered family, too. Of course, like in most of the spaghettis, most of the people in town don't like the new stranger, and things heat up as the story progresses.

Reading bizarro fiction takes some getting used to, as, in many cases, most things seem normal, until one realizes that Calamaro's gun doesn't boom, it burps... or that there are sexually transmitted tattoos, the aforementioned cows with tentacles, or one of the characters wears a donkey mask the whole time. There's a scene involving a prostitute who has a client who makes her do all sorts of nasty things... with squid guts. And then, at times it completely leaves the planet, opting for some nightmarish psychedelia, but they're never so long that one loses the flow of the story.

There's a lot to like about this. For those well-versed in the spaghetti genre, it's filled with a plethora of typical genre characters with names such as Leonard Garko, Sergio Cardinale, Judge Kinski, and a town called Keoma. There's the Bronson Hotel, run by a man named Kersey (Charles Bronson's character in Death Wish). Those little nods to the genre are fun as hell to read. And Krall even gets another genre convention down-pat - the derivative nature of the genre. There's Calamaro dragging the donkey, like Django dragging his coffin. Calamaro is buried up to his neck and has his eyes propped open, like Mannaja, and he's forced to eat a piece of his cheek, as another nod to Django. One thing that Krall gets in there, that only the best spaghettis do, is some sort of character development. We grow to like some of the characters, and in the case of Calamaro, learn a bit about why he is the way he is.

As far as the bizarro aspect of the book, it makes Questi's psychedelic Django Kill! If You Live, Shoot look as conventional as High Noon, by comparison. But even if you strip away the bizarro aspects (but why would you want to?), Krall's written a great homage to the spaghetti western (with a little bit extra, such as some giallo style killings), and it's quite obvious it's a genre he knows well and has a great affection for. Although the bizarro elements may take a bit of getting used to (as well as some rather heaping doses of sexual depravitiy in extremis), I highly recommend this to any lover of the genre.

Be sure to check out Jordan's site at http://www.filmynoir.com.

Retrieved from "https://www.spaghetti-western.net/index.php?title=Fistful_of_Feet:_Book_Review&oldid=57175"
Category:
Cookies help us deliver our services. By using our services, you agree to our use of cookies.