Four of the Apocalypse Film Review

A review of Four of the Apocalypse (1975, D: Lucio Fulci) by Eric Messina 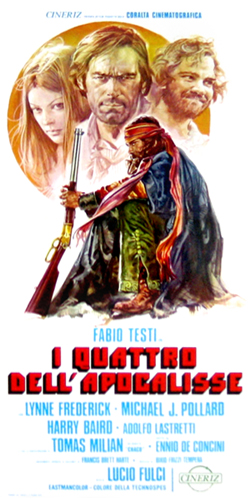 This might be the only time a low level celebrity like Michael J. Pollard worked on a Fulci picture, so any fans of that actor should be pleased to find out this information. Both him and Christopher George have similar career paths, I have more respect for George however since he’s appeared in better trash like ENTER THE NINJA and THE EXTERMINATOR in between stints on THE LOVE BOAT or MATCH GAME. Pollard has that town drunk demeanor that’s perfect for this role and just wait till you see how he ends up a cannibal feast! Even though he appeared in overrated film school chores like BONNIE AND CLYDE, the only way that must’ve happened could have been the fact that he has a better agent than Christopher George. Both actors worked with the maggot maestro, who makes no bones about his distain for actors so he ain’t impressed by any of these horse apples. The handsome Italian stallion Fabio Testi plays Stubby, he’s pretty good and this movie is filled with Hanna Barbera named characters like Bunny, Bud and Clem the town drunk.

Fulci has the shittiest lighting crew and a film of haziness obscures the sky, which is the same complaint I had about CONQUEST, that barbarian film was almost bathed in a thick layer of lighting inaccuracy. I swear, I would watch a dog food commercial if Fulci made it though, he's my favorite director and consistently entertains even if the production quality is pure torture like DOOR TO SILENCE. I have to say these are the most attractive looking people I've ever seen in a Lucio flick and I'm used to watching sweaty bulbous eyeballs and zoom ins on pockmarks, bad skin or teeth, minus the attractive Catriona MacColl of course. A bunch of Christians with a gods and guns worth ethic come bumbling along, (they look like they escaped from THE LITTLE HOUSE ON THE PRARIE set), they wear out their welcome pretty fast. Next the stereotypical villainous Indians arrive; one of them named Chaco who refers to himself in the third person is played by the enigmatic Tomas Milian. He doesn't even look half-breed and has a Manson-esue getup; I actually bought Franco Nero in the Keoma role as more of a biracial Indian than Milian however. 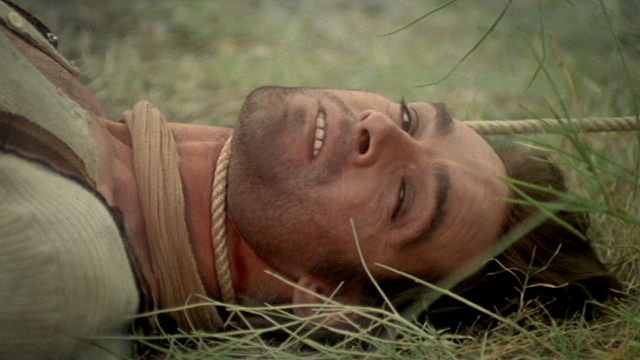 The theme music by The Benjamin Franklin group that follows along with them and their horse as they shoot ducks sounds more like a hippie dippy Byrds/Mamas and Papas song than the typical Morricone track. That aforementioned group is actually the same trio who usually work for Fulci they are Fabio Frizzi, Vince Tempera and Fabio Bixio. Chaco is a pretty groovy sadistic Indian who sends all his new pals on a peyote trip and stabs the fuck out of some strung up white sheriff with his own tin star! The way his dripping eye makeup looks resembles the Norwegian glam metal singer of Turbonegro. The cruel and vicious Indian Chaco nearly defiles Bunny and we get to see her bare breasts. Clem is such a despicable character who seems to enjoy being spit on and acts like a ravenous dog. If you had a slight crush on Lynne Fredrick the girl from PHASE IV and VAMPIRE CIRCUS as I had, then you're in for a treat because she gets topless although it's very hard to enjoy it considering how uncomfortable the situation is. There are very mysterious circumstances surrounding Lynne’s death at the tragically young age of 39 and she is very memorable in this fragile role. 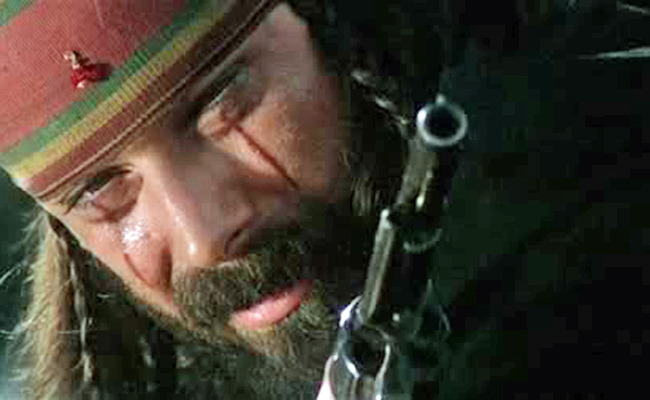 Clem (Pollard) becomes a terrible burden after getting his kneecap blown off in an effort to bash in Chaco’s head with a rock and they end up having to carry him around on a stretcher. Although these four characters have little to no chemistry, I have to commend Fulci for his direction and here’s some validation that he's capable of venturing beyond gore. Bud talks about how in the next town they don't frown upon interracial kissing, this seems like a nod to a film he starred in called STORY OF A THREE DAY PASS which was one of the first films directed by Melvin Van Peebles. Stubby and Bunny, who are the only ones left on the trail continue on into dangerous territory, Clem and Bud have left the scene and I don’t want to give away details on Clem’s exit. The remaining two, hook up with a priest who sort of looks Dario Argento. 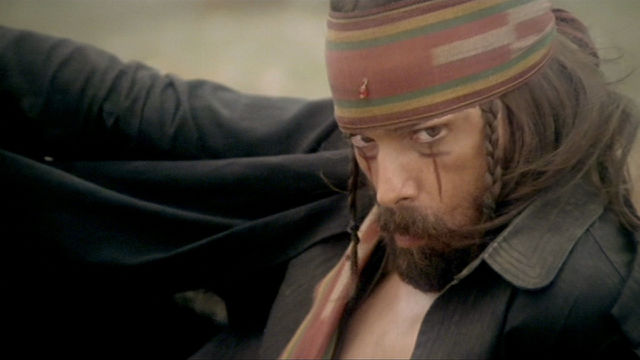 In the town where Bunny and Stubs move onto, Donald O'Brien is the sheriff, it's snowy and all the men hate women for some reason. O’Brien has appeared in as many spaghetti wests as he has Italian gore flicks and will forever be associated in my mind in the title role as DR. BUTCHER M.D. If you’re interested on reading more about Italian exploitation cinema, please visit my site theaterofguts.com, which is dedicated to Chas Balun and Deep Red magazine. Stubby and Bunny venture through a Dante’s Inferno style Hell of sweltering humidity and frozen ice hence “The Apocalypse”. It’s interesting to note that this is the only time I’m aware of Fulci attempting to seem biblical, he was a staunch Atheist up until in death in 1996.

FOUR OF THE APOCALYPSE is a pretty shocking Western, Fulci brought us this just before he forever became synonymous with Zombies and it’s a good example of what he’s capable of as an auteur of demented cinema.

Article written by Eric Messina, who also writes for theaterofguts.com, a site dedicated to Chas Balun's VHS bootleg catalog. He dabbles in Italian westerns and digs the soundtracks of Stelvio Cipriani and Ennio Morricone, which whom he shares initials. SWDb Forum profile
Retrieved from "https://www.spaghetti-western.net/index.php?title=Four_of_the_Apocalypse_Film_Review&oldid=100359"