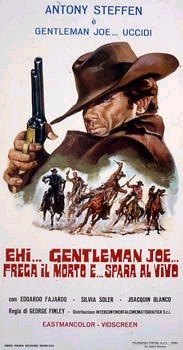 Though his contribution was a small one, Giorgio Stegani had delivered three fairly well known Westerns to the Italian subgenre. Each starring one of the genres top stars (Giuliano Gemma, Anthony Steffen, and Lee Van Cleef). Though the general consensus is that this is nothing more than an average effort, I have come to like it (though it took a couple of tries.) A bordertown has become the subject of heated political turmoil after both the US and Mexico vie for control of the town. "Colonel" Ferreras, self appointed head of the Mexican fight for the town, is killing as many US soldiers as he can. Captain Reese heads the US defense of the town and acts as the law officer. After the Captain is killed by Ferreras, his brother, Joe Reese, comes to town to avenge his brother and defend the town from the marauding soldier bandits. 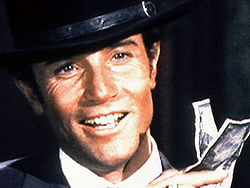 As I said, I wasn't really crazy about this one the first time I saw it. But for whatever reason, I have returned to it now around 4 times and only recently, after rewatching the film for this review, have I come to enjoy the film. It has a pretty sharp Spaghetti atmosphere, an interesting variation on the anti-hero/hero character, some competent action scenes, and a powerful score. On this recent viewing, the plot sucked me in much more than previous viewings. However, that isn't to say that the plot is anything out of the ordinary. It borrows heavily from the Fistful of Dollars structure with a lazy revenge theme that seems somewhat thrown in. Either that or poorly developed. But it is an entertaining film. It takes a little while to pick up the pace but the elongated action scenes fill in the voids quite nicely. Like Stegani's Beyond the Law, the action scenes in the film are not quick and small scale, they are larger and longer and very well placed. Not thrown in at all. But there isn't that many of them. However, these action scenes hardly compare to the action scenes of many others. They are often uninvolving, and flat. But they are adequate. 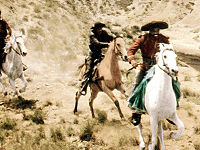 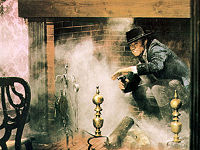 Surprisingly, many scenes in the film are quite atmospheric. Taking place in dimly lit store rooms, fanciful saloons, torch lit streets and so forth. This feels strange compared to most other scenes that are pretty much straight forward in nature with seemingly no attempt at any real kind of art or atmosphere. However, it may be hard for some to fully enjoy these atmospheric scenes when the anachronisms in the lighting are blatantly visible. It seems in Spaghetti land that lanterns and candles and such cast their own shadows on their own source of light! Of course, though, we all come to ignore such anachronisms.

The title of the film would make you think that this is a very gimmicky film. But it isn't really that gimmicky at all. The character of the "Gentleman Killer" is well dressed, well spoken, good mannered, and righteous. And like a more refined man, he keeps his gun in a shoulder holster as opposed to the Spaghetti tradition of the hip. But he can also be hard on his enemies. He seems to be quite the back shooter. Sneaking up on his enemies to kill them. He also turns his enemies against each other quite successfully. Eduardo Fajardo also is quite good as the villainous Colonel. Bruno Nicolai delivers a rather strong score with a quick tempoed riding theme with Gregorian-esque vocals from the I Cantori Moderni. Interestingly, Ennio Morricone conducted the score while Nicolai wrote it. Normally, Nicolai conducts Morricone's scores.

With the divided nature of the film, it's safe to say that any newcomer to this film has about a 50-50 chance of fully enjoying it or not. I watched the Wild East disc which apparently has had some problems with the transfer. Because of the conversion or something, the image can look squeeshed on fullscreen TV's or monitors. However, its widescreen looked great on my PC monitor.

Retrieved from "https://www.spaghetti-western.net/index.php?title=Gentleman_Killer_-_Review&oldid=100333"
Category:
Cookies help us deliver our services. By using our services, you agree to our use of cookies.