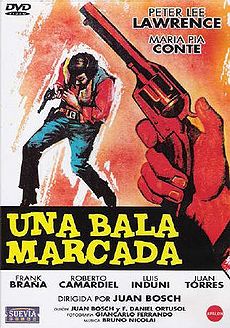 Some of the titles of the spaghetti westerns have a powerful impact and the title of this one (maybe more paella than spaghetti) tickled my imagination and produced a stream of vivid images related to the spiritual transformation of a hero. Such a theme might be unlikely within the genre, but not impossible – Christianity was present in many of these movies and surely can offer some possibilities. But on this occasion, it’s probably better to stick with the Spanish title – although it´s not so thought-provoking, it suits the film better.

In a brief opening scene we are introduced to Peter Lee Lawrence´s bounty hunter character Arizona (in the Spanish version Garringo), and before we go any further, I’d like to say something about the film´s credit sequence – it is composed of almost static shots of Lawrence´s face in a dimly lit room, with cigar smoke swirling around him. It is simple, but very effective – although some viewers will no doubt notice that the perfectly suitable Bruno Nicolai score was borrowed from Have a nice funeral, Sartana will pay.

Due to an accident, Arizona appears in the town’s main street with his saddle not under his ass but over his shoulders. Not a very effective way to introduce yourself to the local thugs. Soon, after he has found out that probably every store is owned by a fellow named Styles, those thugs begin to make fun of him. But they quickly realize that the newcomer is not a dismounted greenhorn and his real introduction is on its way – he leaves it for the eyes of the right person. Arizona´s arrival introduces a truly fascinating segment of this film. Members of Styles´ gang ride into town, dragging a tied man behind one of their horses. Three gunshots suddenly liberate the already dead body and thanks to some great cinematography and music (although again from another Nicolai´s western) our attention is drawn to a charismatic Lawrence, who puts his gun back into his holster, clouds of dust swirling around him.

This introduction of a hero belongs to one of my favorites introduction scenes of the genre and although I´m not a die-hard fan of Peter Lee, this time his charisma fills the surrounding area with high voltage. I’m almost willing to believe that he could really beat up four, five Styles´ henchmen – even after a few days walk through the Wild West wilderness. I think this higher rate of coolness is caused by (four) virtues of a true gunslinger – (1) he is not shaved for a few days (logical conclusion, when someone wanders through a wasteland), (2) he has some dirt on a face, (3) his raggedy gunman leather outfit is very convincing (and totally awesome) and finally (4), the main scoundrel can knock him down but he stands up with a funny line and manages to depart on a fiend´s horse. This grittier look of Peter Lee is in contrast with his more elegant smartass characters in 32. Caliber Killer or Days of Violence. Accordingly, his first encounter with Maria Pia Conte´s striking beauty highlights his coarse uppish manners – instead of a gentlemanly approach, he just spanks her ass.

Even Roberto Camardiel´s character Duffy can´t resist his personal charm and hires him for a work on his farm, where we are introduced to one not so common things in the genre – a whisky distillery – and we also find out that Arizona is not that good in digesting strong booze. The relationship between these two likeable characters is elaborated very well, they soon become friends, creating a sort of father–son relationship due to a bigger age difference, or a reversed master-pupil link, in which younger protagonist is a teacher to the older and clumsier Duffy, who is helpless in a fight against greedy landowner Styles. With few uncovered truths about connections between Duffy, Styles (Frank Braña) and Katherine (Conte), Arizona organizes a farmer resistance (But it’s not only about justice, also about revenge (we’ve learned about his motivations in the beginning of the movie).

This story and its nuances reminds me of another western – A Stranger in Paso Bravo. In Salvatore Rosso´ movie, the hero is also deprived of a horse and soon drawn into a confrontation with crooks in a town he just entered. Local landbaron Acombar (Fajardo) is, as usual, nearby to embitter his life. Also a black-clad gunslinger is present (in Arizona on Earth it is black-clad gunman played by Carlo Gaddi, who invites the hero to a duel) and finally, Gary Hamilton (Steffen) gets Acombar on his knees with the help of the townspeople. In the review of Rosso´s movie, Scherpschutter wrote about some parallels between And God Said To Cain and A Stranger in Paso Bravo. I would like to add Juan Bosch´s movie to the picture – it could create a sort of spiritual trilogy, in which Arizona indeed takes place on Earth, the happenings of the Stranger in purgatory and Klaus Kinski’s revenge in the dark thunderstorms of hell.

When the endings of all three movies are compared, Arizona, unfortunately, becomes a loser. The finale is surprisingly weak (in comparison to other scenes of the movie), it’s an almost trivial showdown, directed on the autopilot, spiced with only a few good ideas. I expected something similar to above aforementioned segment, which contained plenty of little great ideas formed into a multilayered meta-scene, an apocalyptic finale, respecting the title Arizona on Earth. But apparently director Juan Bosch and his colleagues ran out of ideas and decided to make a conventional shootout, complete with an utterly clichéd killing of the villain (no, Styles won´t fall off a cliff). Although the final fistfight (or rather forkfight) is directed spontaneously and dynamically, the precise moment of Styles´ death is just banal. But enough. This spaghetti offers a somewhat harsher look on Peter Lee Lawrence, similar to Marchent´s Garringo, and will be rewarding for more than just the fans of this juvenile German actor. After watching it, one unanswered question still keeps bothering me. Why these heroes always go away from the warm of a cozy cottage (with whisky distillery!) and hugs and kisses of a possible girlfriend (this time it is really hard to believe, that Arizona left Maria Pia Conte behind). Maybe Arizona just can´t find a home on Earth – and his wanderings through the wilderness simply must continue.

Retrieved from "https://www.spaghetti-western.net/index.php?title=God_in_Heaven_..._Arizona_on_Earth_Review&oldid=96825"
Category:
Cookies help us deliver our services. By using our services, you agree to our use of cookies.