Difference between revisions of "Gold" 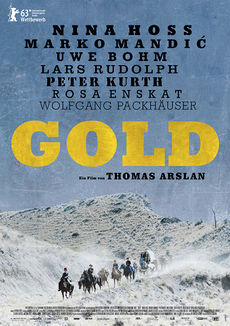 Written and directed by Berlin School filmmaker Thomas Arslan, Gold tells of a perilous trek undertaken by a group of seven German and Austro-Hungarian immigrants during the Klondike Gold Rush at the end of the nineteenth century. Starting out from Ashcroft, British Columbia, they soon have to realize that their journey’s destination, Dawson City, Yukon, might be as far beyond their reach as the better lives they crave. The lure of gold exemplifies the film’s axiom: no matter how adverse the circumstances, hope (even against hope) provides the conditio humana with one of its most powerful impulses. Notwithstanding fraud and deception, hubris and nemesis, cowardice, madness – and a bear trap in the middle of nowhere.