His Name Was Holy Ghost Review 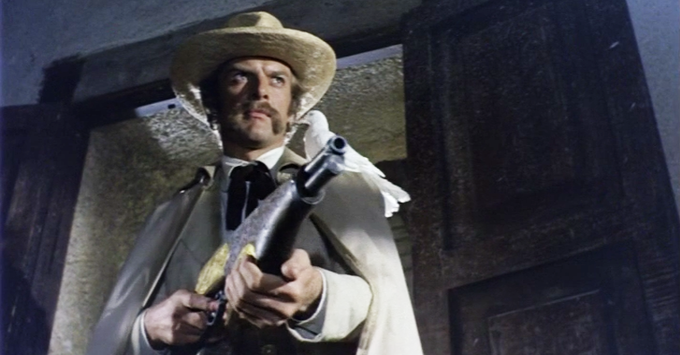 The Holy Ghost from the title is played by Gianni Garko: he’s a man dressed in all-white, a white dove perched on his left shoulder (*1). Like the black-clad Sartana, he seems to have the ability to appear and disappear at will. But the Trinity movies have done their devastating job: what used to be tongue-in-cheek is now slapstick, and our Ghost has a Bambino like partner, played by a chubby Cris Huerta, who knocks people on the head in stead of the chin. The setting is also different: it’s not set in a western town, but across the border, in war-torn Mexico.

The film opens with a group of Mexicans being rounded up to be humiliated and shot. They are partisans of a man called Mendoza, the elected president of the country. The executionors are working for the renegade general Ubarte, who also holds claim to the presidency. While celebrating their victory, they’re surprised by a man dressed in white, who uses an odd looking machine gun to clean up the place. The Holy Ghost is asked by the men of Mendoza to join their people’s revolution against the oppressor Ubarte. He agrees, but not out of sympathy for the people, but for personal profit: He’s in possession of a treasure map with a hole in it, and is looking for the person who can give him the missing information, an engineer called Hernandez, who’s held prisonor inside an army fort ...

Garko sports the same moustache as Franco Nero in The Mercenary and even lights a match at a hanged person’s boots. He’s the 'good’ professional helping the revolutionaries, while Boido and his gang are the 'bad’ professionals working for the dictator. There’s also the lovely señorita who’s a fervent supporter of the revolution and the 'Trojan Horse’ sequence (Garko using prostitutes to get into the fort) echoes a similar scene in Compañeros. In other words: This movie could have easily been the third part of Sergio Corbucci's Zapata trilogy (instead of the actual third part, What are we doing in the Middle of the Revolution?), but it was directed by Giuliano Carnimeo, a politically less comitted director; the Mexican revolution is used as a backdrop but there are no socio-political comments and unlike Nero’s characters in Corbucci’s Zapata movies, Garko’s Holy Ghost does not develop a revolutionary awareness: he saves the life of Mendoza’s daughter, but only because he’s supposed to be the hero no one would ever dare to sacrifice a heroine as beautiful as Pilar Velazquez ...

Director Carnimeo and his screenwriter Tito Carpi keep things moving and the movie is often enjoyable in spite of its sillines; there are a few inspired moments - especially on dialogue level - but too many jokes are terribly unfunny. The overall atmosphere is light-hearted but there are violent outbursts throughout, as if reels from different movies were mixed up during post-production. Basically this is a Zapata movie in the style of Sartana seasoned with a strong dose of Trinity. The second half is a bit more entertaining than the first, but the finale - the battle within the fort - is a chaotic hodge-podge with the comedy in overdrive. Garko looks a bit bewildered in some scenes and Huerta is not a good stand-in for Bud Spencer, but Poldo Bendandi - looking like a Mafia Don - is fun as the ruthless Ubarte. Bruno Nicolai’s score is another asset (the main theme is particularly fine) and Pilar is just ... wow! 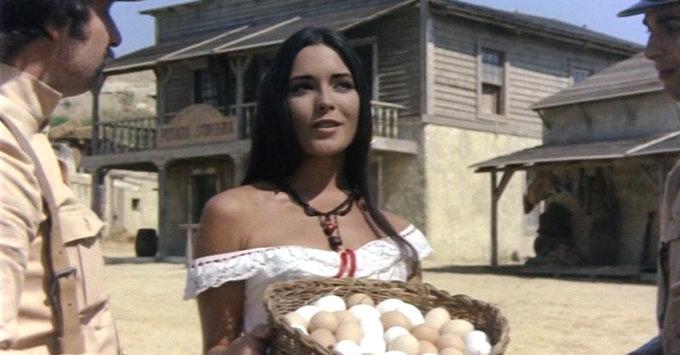 Simon Gelten is a long time contributor to the SWDb. "I'm not as old as Tom B. but I'm working on it. I hope to catch up with him by the end of the next decade.", he says. Simon saw all movies by Sergio Leone and several by Sergio Corbucci in cinema, most of the time in Eindhoven, the city where he was born. Currently, Simon is living in Turnhout, Belgium. Simon is active within the database as both Scherpschutter and his alter ego Tiratore Scelto.
Retrieved from "https://www.spaghetti-western.net/index.php?title=His_Name_Was_Holy_Ghost_Review&oldid=113939"
Categories:
Cookies help us deliver our services. By using our services, you agree to our use of cookies.