If You Want to Live... Shoot! Review

Upon being set up in a game of cards and being forced to kill one of his opponents in self-defense, Johnny flees the law and hides at a local farm after getting shot by a group of bounty hunters led by a man named Stack. He recovers thanks to the hospitality of the local inhabitants and is soon able to resume his journey. Unfortunately, on account of an unfortunate turn of events, he is constrained to face a corrupt landowner and a Mexican gang leader, both of whom are hell-bent on bringing the whole region into submission… 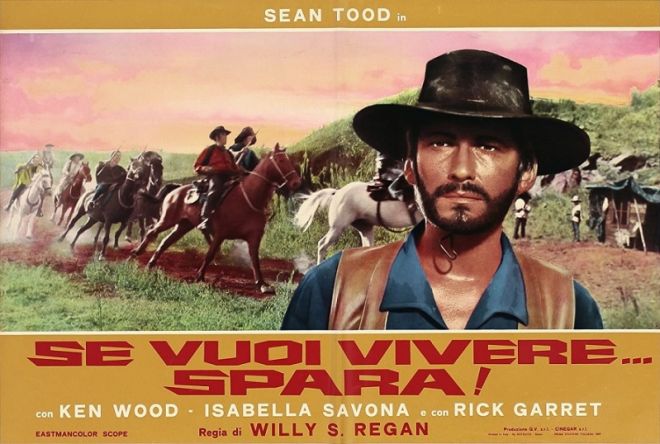 Although Sergio Garrone is sometimes referred to as the ‘fourth Sergio’, there is no disguising the fact that his directional efforts were not on the same stylistic level as the movies made by the other three Sergios. Notwithstanding, what Garrone lacked in terms of directing expertise was often compensated by unusual plotlines and generally a good sense of atmosphere as exhibited in his more renowned works; Django the Bastard (1969), Vendetta at Dawn (1970) and No Room to Die (1969) dealt with supernatural themes, family drama as well as the topic of human trafficking respectively, which endowed all three opuses with an interesting edge distinguishing these ventures from a myriad of other low-budgeted spaghetti westerns. The issue with If You Want to Live… Shoot! resides in the fact that the storyline here is far from innovative or refreshing, on the contrary, the whole script feels like a crude regurgitation of a number of miscellaneous genre tropes and clichés that are then slapped together, reshuffled and stacked up on top of each other in a vain attempt at imparting a certain dose of originality without actually coming up with anything new or all that interesting.

The initial premise involving a rigged card game going terribly wrong is intriguing and serves as a great point of departure for an interesting story, however, all of it then devolves into utter mediocrity with a corrupt landholder terrorizing the area and endeavoring to force poor farmers out of their lands as well as a predictably rambunctious Mexican gang leader throwing Sancho-esque fits and being irritating all around. The motion picture initially feels like it’s going to turn into a tale about a man trying to prove his innocence apart from battling it out with vile bounty killers, then it begins to shift into a revenge-style flick, but not quite. There is a bit of everything: farmer’s teenage daughter taking a shine to the main hero, a suave gunslinger helping the protagonist out at several junctures, the said gunfighter’s girlfriend assisting him and the male lead to escape captivity and so forth.

All in all, it’s an amalgamation of different elements and disparate motives meshed together and then presented as one integral storyline; the problem with this approach dwells in the fact that individual constituents do not exactly align, as none of them are developed and none of them can be sufficiently developed for that matter by virtue of their sheer number as well as flick’s limited running time. All components ultimately fail to coalesce into one stylistically coherent whole, which furnishes the endeavor with a disjointed appearance. What is worse, film’s trajectory seems to be guided almost by mere chance instead of being propelled by protagonist’s determination and active participation, which makes the leading man look like a victim of circumstance. In other words, there is no character development and no prevailing goal, which robs the story of interest. To add insult to injury, Garrone’s execution happens to be just as tentative as the script itself in the sense that Garrone apparently strives to find his voice at many points, yet to no avail; he eventually fails to endue the tout ensemble with a consistent tone, ponderously introducing some superfluously jocular bits here and there, thereby vacillating between comedy and violent action in a rather cumbersome manner. The absence of any overarching narrative purpose outside of the immediate plot progression, the cursory writing, Garrone’s irresolute directing as well as erratic storytelling all come to debilitate the motion picture completely and reassert film’s firmly humdrum status. 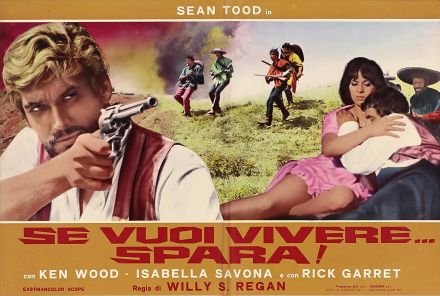 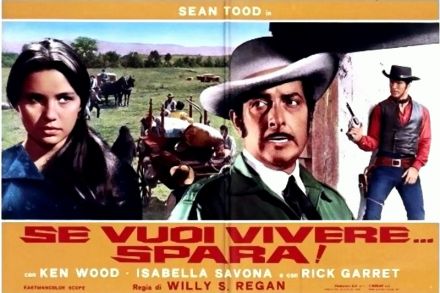 Ivan Rassimov credited as Sean Todd here has a great, rugged face for westerns. In many a movie, he proved himself as a performer capable of giving decent performances without relying on his looks too much and If You Want to Live… Shoot! is no exception in this regard. Rassimov is quite convincing as Johnny Dark, notwithstanding, given script’s rachitic nature, he ultimately cannot transcend the pervasive one-dimensionality his character is laden with. Giovanni Cianfriglia listed as Ken Wood makes for a charismatic bounty hunter and an excellent villain, however, I feel his role is severely underexposed and regrettably, stays in the background most of the time. Riccardo Garrone plays the role of the cool, debonair pistolero quite convincingly, nonetheless, the potential of his part is completely squandered by virtue of the story’s utter superficiality. Franco Cobianchi d’Este is just your usual, cookie-cutter Mexican bandit with a big mouth and a trigger-happy mentality; to be perfectly honest, I prefer his more restrained approach towards acting, which can be observed in Garrone’s No Graves on Boot Hill released in the same year; his playacting here oscillates between being indifferent and being annoying.

Albeit remarkably nondescript and completely inconspicuous, the cinematography by Alessandro Mancori stays competent most of the time, but fails to contribute anything out of the ordinary apart from a couple of more stylized shots towards the end, which aren’t all that stylistically pleasing or dexterous to begin with. To my way of thinking, the soundtrack by Vasco & Mancuso constitutes one of their least memorable scores. We do get a fair batch of decent tunes featuring some harmonica, organs and trumpets, none of these are all that distinctive though and some of them are actually more reminiscent of Lallo Gori’s composing style for some odd reason. I believe one piece of music used here was even composed by Gori and then later used in Fidani’s Django and Sartana Are Coming… It’s the End. Suffice to say, film’s music isn’t graced by any outstanding uniqueness either and unfortunately renders the whole enchilada even more featureless.

At the end of the day, the issue with If You Want to Live… Shoot! is that it just doesn’t work all that well in the end. The script is too confused and disjointed in the sense that it wants to do too many things at once and fails at that miserably, whereas Garrone’s style and direction are still too inchoate here to give sense as well as meaning to this rather inconsequential jumble of a motion picture. Some genre completists may find something of interest here, but it’s hard to recommend it to anybody else. 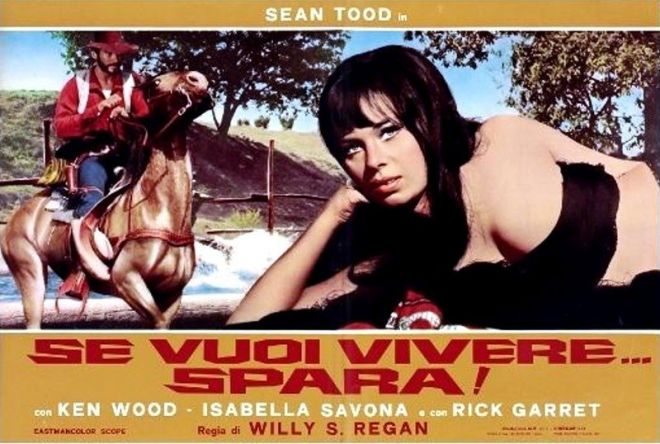 Retrieved from "https://www.spaghetti-western.net/index.php?title=If_You_Want_to_Live..._Shoot!_Review&oldid=117371"
Categories:
Cookies help us deliver our services. By using our services, you agree to our use of cookies.