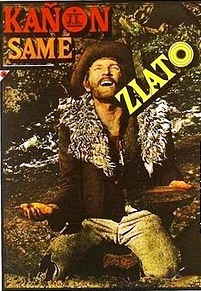 Tom the prospector has reached his goal - he has discovered a rich lode of gold in a narrow canyon. He works feverishly every day and his bag where he deposits the gold nuggets gets heavier and heavier. The day before his departure, he finds a big gold nugget in a deep pit. When he tries to get out of the pit, there is a report of a gun and Tom falls down to the ground. His former friend Jack bends over the limp body, having no idea that Tom is only feinting unconsciousness. A fight for life and death breaks out between the two men. Jack is defeated and Tom ties him to the roots of the trees. Then he again sinks to the pit to get hold of the golden nugget. But, exhausted by both the previous work and his wound caused by Jack's shot, he does not have the strength to crawl up from the pit. Both men, who had been separated by gold, face a cruel death. They therefore try to agree on what to do. Tom throws up a knife to Jack to cut the ropes and then help Tom to get out of the pit. But the knife falls out of reach of Jack's hands. There is no way out of the situation. Jack nevertheless assures Tom that everything will turn out well. Several days later, there are eagles' voices sounding above the two motionless bodies.