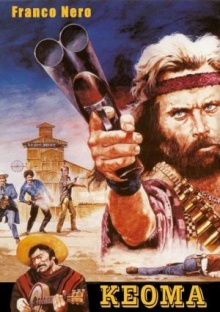 Keoma (Nero), a half-breed Indian is wandering through the West after the conclusion of the Civil War. He returns to his home town of Skidoo City to find it rife with plague and under the despotic control of Mr. Caldwell and his legion of hired guns. Keoma fights to free the town of the corrupt who rule it and to discover just who he is as well.

This was one of the very last Spaghetti Westerns to be made. What they call a "Twilight" Spaghetti. It is also one of the best and most poetic of the genre. It is full of drama, tragedy, violence, and beauty. Very moody and atmospheric. A very different change of pace for director Enzo Castellari who had just finished the slapstick, comedy spaghetti Cipolla Colt, before this. It is very well made and handled and very engaging. Creates some great characters. Nero plays the tragic hero very well. Searching for himself through baron wasteland full of hatred and violence at every turn. He has adapted to this but he also wishes to keep control of his humanity and not become a senseless murderer. He resists the forces of the west that swallow men's humanity and their lives with it. So he comes home to father and friend, George.

The film was written by popular spaghetti western actor, Luigi Montefori AKA George Eastman. He portays a West full of prejudice and hatred. A very depressing film to say the least. It is aided in this by the gothic atmosphere and moody score by the De Angelis brothers. Filmed in Italy. Although Italy doesn't look anything like the American West, this doesn't matter because this film simply creates it's own West as mentioned above. After you notice this, you do not care in the least if it looks realistic or not. You are captured by the film's brutality and beauty. This film is almost structured like a song. In many ways, this film is a ballad. Telling a story as if it were a song. This is achieved through the great narrative given to the flm by the music. And even if the lady singing has a very high pitched voice, it doesn't really affect the score which still manages to be great. The best score in the genre in my opinion. Modelled after the music of Leonard Cohen used for the McCabe and Mrs. Miller soundtrack. Folk music. Very beautiful and catchy.

The acting is also extremely good. Franco Nero portrays a character who is emotionally confused but still tough and mature. A tragic anti-hero. William Berger is great as usual. He makes his character very likeable and deadly. Woody Strode was a proud last minute addition by Castellari who gloated arounnd saying: "I got Woody Strode!" It is a very good addition. Giving the film more of a social conscience. The rest of the cast is rather unknown but still good. Donald O'Brien starred in just about all of the Twilight Spaghettis. From Four of the Apocalypse, to Mannaja, to this one. He gives a good performance but is not given the role of the real villain even if he is the traditional villain. The real villains are Keoma's half-brothers. They are Joshua Sinclair, Antonio Marsina, and Orso Maria Guerrini. They are truly hateable. Ruining Keoma's childhood with racial violence. All greatly acted.

The directing is top notch. Castellari handles the plot very well and incorporates character development, social commentary, drama, tragedy, and action all in to one film. There is no time for comedy. This is a serious movie and handled seriously by Castellari who directs his career best.

One of the best spaghetti westerns ever to have been made. A masterpiece. It was followed shortly by the equally great Mannaja by Sergio Martino. Great film in every department. 6/5. Recommended to everyone. Keoma.