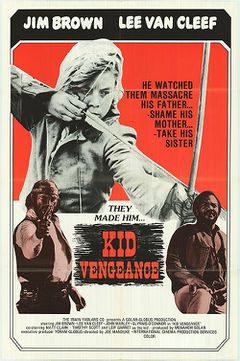 Vengeance, vengeance, always vengeance, this time even Kid Vengeance. Don’t be fooled: the vengeance in this movie might be exacted by a kid, but it’s by no means a kiddie movie. It’s a full-blooded, nasty vengeance movie from the days when political correctness was not yet on filmmaker’s agendas. Kid Vengeance is also the twin movie of God’s Gun. Both films were shot in Israel and produced by the infamous cousins Globus & Golan, who revitalized independent film making in their home country with projects like the very decent Operation Thunderbolt (1977), but are probably better known to audiences across the globe for gung ho, right-wing productions like Delta Force, Firewalker or Cobra.

This film rather falls in that gung ho category, even though there’s no political subtext (thank God, or his gun). Lee Van Cleef is reunited with then 15-year old Leif Garrett, who also appeared in God's Gun, but this time around, Garrett is not his protégé, but his sworn enemy. Van Cleef is a headband wearing bandit (I guess he’s supposed to be an Indian) who ruins Garrett’s life: he kills his father, shames (and kills) his mother and kidnaps his sister. Garrett, who has witnessed the rape, starts following the gang through the desert, picking off the bandits one by one, killing them in gruesome fashion, using bow and arrow, rocks, scorpions and snakes. In other words: everything the desert has to offer, can and will be used against them. 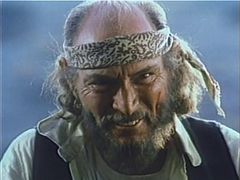 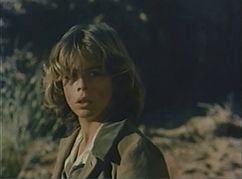 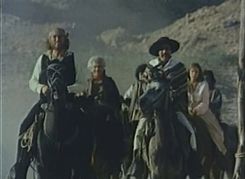 It’s a small miracle that this film was shot. Globus and Golan had dropped the crew of God’s Gun in the middle of the desert, and the affair had been one of the worst experiences ever for the people involved. For this reason it’s also a small miracle that Van Cleef went back to the Israeli desert to star in the second half of the diptych. I suppose he had signed a contract for both movies, but it might have helped that Globus and Golan had also signed Jim Brown for the second entry. The two men had appeared side by side in westerns like El Condor and Take a Hard Ride and had become good friends. In Kid Vengeance they have very few scenes together. Brown is a prospector who teams up with Garrett after his gold has been stolen by the bandits, and his part seems ill-defined; he comes and goes in the movie, and occasionally looks bewildered. They probably had better hired Eli Wallach for the part. What am I doing in the middle of the desert?

The director of the first movie, Italian Gianfranco Parolini, was replaced by Joseph Manduke, a man who had almost exclusively worked for television (among other things, he had directed episodes of Dynasty !). Some call this one of the worst ever (1). What can I say? It’s not good, it’s not even half-decent. Van Cleef, Brown and Garrett do their best, but eventually the film looks as cheap as it probably was. Once again working conditions must have been very difficult, and in some scenes Van Cleef (who’s supposed to be a ruthless villain) looks very worried about young O’Conner, who’s visibly suffering from the atrocious heat. Don’t expect anything in terms of style. There’s no Leone here, only a Manduke. But still … if you watch it like I did, with very low expectations, you might enjoy it. Gung Ho!

Retrieved from "https://www.spaghetti-western.net/index.php?title=Kid_Vengeance_Review&oldid=106557"
Categories:
Cookies help us deliver our services. By using our services, you agree to our use of cookies.