Little Rita of the West Review 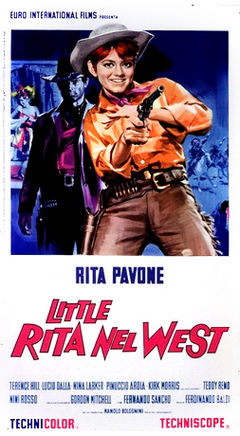 This spaghetti western oddity, a musical with a lot of songs, a fair amount of jokes and even some real spaghetti western action, was supposed to give a boost to the acting career of Italian singer Rita Pavone, knicknamed Little Rita because she was only 1,49 m tall and weighed no more than 39 kilos (1). For various reasons, the film failed to do so. Instead it became a key movie in the career of blue-eyed Italian actor Mario Girotti, coming home from his Sauerkraut adventures, and using his Americanized pseudo of Terence Hill for the first time.

It’s remarkable that no more than three years after Leone had defined the genre with A Fistful of Dollars, the spaghetti western had already matured to a degree that it could be parodied. Comedy had been an ingredient of the genre from the beginning, but Little Rita nel West added a strong auto-referential element to the mix. Characters and entire scenes of key movies are parodied, and the movie also seems to poke fun at the anti-capitalist idiosyncrasies of some of the early political westerns, scripted by Franco Solinas. Piccola Grande Rita – Big Little Rita (2) - is the fastest girl out West, who robs, in true Robin Hood style, thieves, robbers and bounty hunters, only to give the money to … no not to the poor, but to the Indians. Chief Bisonte Seduto (a hilarious Gordon Mitchell) agrees that gold is the root of all evil, so in the end, the collected gold is literally blown up with the help of explosives.

I had always avoided this movie because I thought it was atrocious, but when I finally gave it a chance, I was pleasantly surprised. It has too many silly moments to be entirely successful, and they also could have trimmed it a bit, but overall it's good fun. The songs vary in quality, but the title song, played over a lovely, Pink Panther style credit sequence, is very catchy and I also liked the song performed by the saloon girls. The jokes are likewise, some work, some don’t. When she has cleared the West of thieves and robbers, the only two persons between Rita and her dream world are the two infamous bounty hunters Ringo and Django. The actor playing Ringo looks (and is dressed) more like No Name, but Lucio Rosato, who’s playing Django, is Franco Nero’s spitting image, and the jokes on his behalf are quite funny. There’s also a nice scene in which an Indian brave pantomimes the various ways of torturing a prisoner to death.

Ferdinando Baldi was asked to direct the movie, because he loved musicals. The choreography of the musical interludes, was done by Gino Landi, one of the country’s most prominent choreographers. Thanks to the presence of familiar faces like Terence Hill, Fernando Sancho and Gordon Mitchell, and some distinctive camera work by Enzo Barboni, the film has genuine spaghetti western feel. Hill isn’t very good as Rita’s lover Black Star, but both director Baldi and producer Bolognini would keep his name and face in mind. Reportedly Pavone was very dynamic and her restless behavior on the set led to minor incidents with other actors (3). The film’s chances at the box-office were jeopardized by her wedding plans with Italian singer Teddy Reno (he has a small role as the sheriff in this movie). Reno was much older than Pavone and still married to his first wife. Until 1970 there was no divorce law in Italy, so the couple had to move to Switzerland in order to marry. Some cinemas refused to program it because of the scandal Pavone’s wedding plans had provoked in the catholic country. 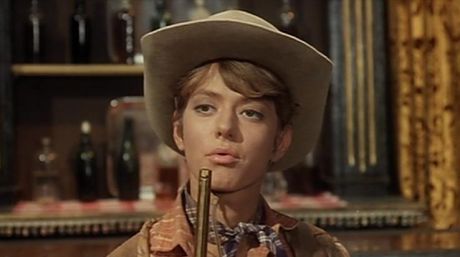 Retrieved from "https://www.spaghetti-western.net/index.php?title=Little_Rita_of_the_West_Review&oldid=130555"
Categories:
Cookies help us deliver our services. By using our services, you agree to our use of cookies.