Difference between revisions of "Mannaja" 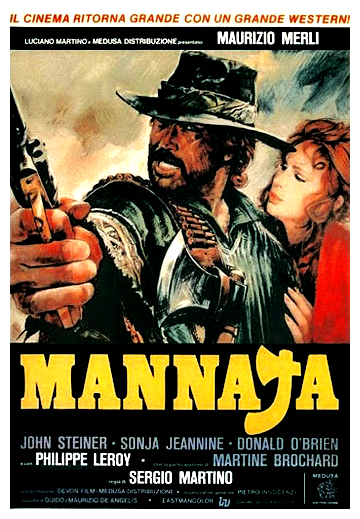 Blade gets involved with an unscrupulous mine owner, his daughter and his henchman, a wanted outlaw, and a saloon girl in the town of Suttonville.

Despite coming along fairly late in the cycle, this spaghetti western is one of the genre's best. Maurizio Merli plays Blade, a bounty hunter who captures outlaw Burt Craven (Donald O'Brien) by throwing his hatchet and chopping off Craven's hand. In the nearby town of Suttonstead, Blade wins a poker game against Waller (Caligula's John Steiner), and -- because he can't get a reward for Craven -- frees his captive. Later, Waller ambushes Blade in the wilderness, burying him up to his neck and sewing his eyelids open so his eyes will be burnt out by the sun. Craven discovers Blade and repays his freedom by saving the now-blinded gunman, who learns to shoot by sound rather than sight. Director Sergio Martino is best known for stylish thrillers and uses his considerable visual style to give this violent, grandiose film an almost mythical resonance. Fans of gritty realism in spaghetti westerns may not relate to Martino's flamboyant style, but most Euro-devotees will find it immensely appealing. Martine Brochard, Rik Battaglia, and Philippe Leroy co-star.