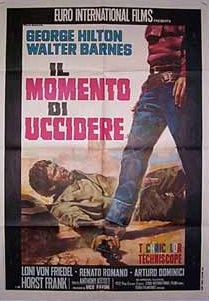 Two famous gunmen, Lord and Bull are called to a southwestern town by Judge Warren to find a gold reserve, worth $500,000, hidden by a Confederate colonel. The judge is killed and Lord and Bull have only two clues as to where the gold is hidden: the name of the colonel’s favourite book and the name of the man’s handicapped daughter. The girl is kept as a prisoner by her uncle, town boss Forester, who has hired an entire army of gunmen to deter others. Lord and Bull manage to eliminate them all in a series of shootouts, but the script has a few surprises in stock for the two men...

Featuring a charming gunslinger with a grumpy assistant, this is often called a forerunner of the Trinity movies. The atmosphere is tongue-in-cheek throughout, but there’s hardly any slapstick and the violence is still of a rather gruesome nature. The film isn’t always sure which way to chose and it's also a bit slow, but it’s fun to watch. Horst Frank is great as Forester’s psychopathic son and Von Friendl turns in an endearing performance as the colonel’s handicapped daughter with a mind of her own. - Scherpschutter