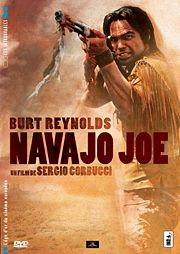 A Navajo village is slaughtered by the gang of Comancheros led by the half-breed Duncan brothers, who sell the Indian scalps for one dollar a head. A young Navajo named Joe (Burt Reynolds) has survived the massacre and is now following the gang from a distance, killing the men sent to him by their leader. In town the gang is told, by a greedy citizen who wants to cooperate with them, about a transport of half a million dollars. They rob the train and kill all the passengers, but their plans are frustrated by Joe, who steals the train with the safe from them at night. He is captured and brutally tortured, but liberated during the night by two dance-hall girls and the musician who accompanies them. Joe now lures the gang members to the burial grounds of his tribe, where he faces them one by one and exercises his bloody revenge …

The other Sergio made this movie immediately after the ground-breaking Django. The famous producer Dino de Laurentiis, whose first western this was, wanted to outdo the success of A Fistful of Dollars by producing a film with twice as much violence and twice as many victims. Corbucci signed in because he thought Marlon Brando would play the part of the avenging Indian. But Brando was substituted by the then virtually unknown Burt Reynolds (after Corbucci had turned down Ricardo Montalban). Although not among Corbucci’s very best movies, this is a great action movie, violent and exciting. It’s also worth watching for the beautiful Nicoletta Machiavelli, as the half-breed Indian girl Estella, and Aldo Sanbrel, in a rare leading role as the leader of the Comancheros. Ennio Morricone wrote one of the weirdest scores of his career, under the pseudonym of Leo Nichols.

Video: The film is presented in its OAR of 2,35:1 and the anamorphic print is in pristine state. There’s no visible print damage and I spotted no artifacts at all in the backgrounds. The only problem is that it occasionally looks a bit soft. But colours are strong throughout and the DVD really is a pleasure to watch. Audio: There are two audio-tracks, English and French, both DD 2.0 Mono. They both do the job, but neither of them is particularly impressive. The English audio simply sounds too clinical, as if you are in a sound studio, like one French critic put it. I only briefly listened to the French track and it seemed to have a more natural sound (even though it’s not an ‘original’ track – spaghetti westerns usually were shot without natural sound, but afterwards an ‘original’ Italian, English and Spanish audio track was created) but there have been some complaints about the score sounding a bit shrill. The French track is incomplete: previously cut scenes that never have been dubbed in French, are presented in English with French subtitles. The menu doesn’t offer an option to watch the English version without French subtitles, but you can remove them on-line with your remote control. Both tracks have some lipsync problems, but I guess we can’t blame the DVD company for this. The menus really look beautiful with scenes from the movie fading into the ocre-coloured backgrounds.

Extras: The most interesting extra is the introduction of the movie by Jean-François Giré, author of the excellent French standard work on eurowesterns, Il était une fois le western européen. Not only does he talk about some the aspects of this movie, but he also presents it in the context of Corbucci’s body of work. It’s very well done, but most of what he says won’t be very shocking or new to people with an above average knowledge of the genre. There’s also a trailer, a photo gallery and some written information, of course all in French.

Verdict: This is a nice release of a fine spaghetti western, with great image quality, but less impressive audio quality. Unlike two other films released at the same time by the same company – Far West Story (Sonny and Jed) and O’Cangaceiro – Navajo Joe is widely available in other countries , so this release mainly seems aimed at the French market (ironically it is the only English friendly release of the three!). 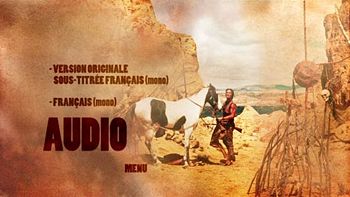 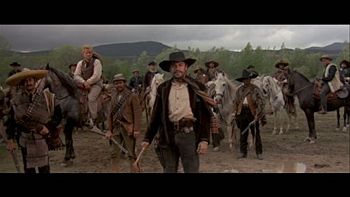 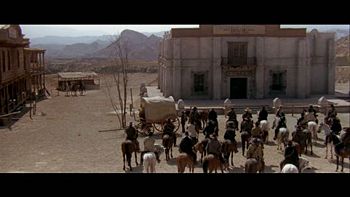