Difference between revisions of "Nybyggarna" 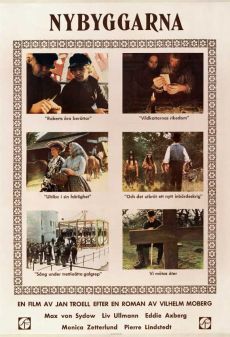 Continues the story of The Emigrants (1971). The Swedes arrive in the USA. They still have a long journey to Minnesota where they expect to find other Swedes. When they arrive there, each family searches a place to build a home. Karl-Oskar and Kristina live a better life than in Sweden, even though Kristina is very homesick. Karl-Oskar's brother Robert and his friend Arvid go to California to follow the gold rush. However, Robert returns sick without Arvid who died on the way to California. Robert doesn't get better and dies. Later, Kristina dies while being pregnant. Karl-Oskar gets much older than her and spends his last years in solitude.

The film was nominated for the Academy Award for Best Foreign Language Film 1972. It and the first part, The Emigrants, are the basis for the 1974 American television series "The New Land".