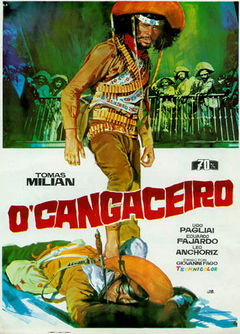 Set in Brazil, and provided with a score and a costume design highly influenced by local traditions, O’ Cangaceiro may seem an exotic detour for the genre at first glance. But the film covers quite familiar Zapata grounds and fans should quickly feel at home. All distinctive elements are present: there’s the farmer turned revolutionary, there’s the corrupt politician, there’s the sadistic police officer and there’s the outrageous violence and the wry humour. There’s also a lot of religious symbolism, more emphatic and outspoken than ever, often verging on the absurd.

1925, a Northeastern province of Brazil. The sadistic colonel Minas (Anchóriz) has surrounded a famous cangaceiro (bandit) in his hometown and massacres all townspeople, even those who weren’t members of the gang. Only one man survives the slaughter, a small farmer called Espedido who is nursed back to health by a crazy hermit, who thinks he is sent (= espedido) by God to Brazil to follow the footsteps of Jesus Christ. Espidido is baptized the Redeemer and starts spreading the word with a cross in one hand, and a machete in the other. After a black cangaceiro has told him a fire arm is more powerful than a machete (guess what kind of duel we get later on in the movie), Espidido goes looking for guns and a private militia, but he still has no clue how to become a true Redeemer. Enter the inevitable European professional, in this case a Dutch oil prospector who has read many books (Are there other books than the bible? Espedido asks). The Dutchman introduces Espedido to the local governor, who wants Espedido to eliminate all other cangaceiros of the region, so he will become a hero and the only true cangaceiro left. This was the opportunity Espedido had been waiting for all the time, but it’s of course a trap: the governor has paid American-Italian gangsters (armed with Tommy-guns) to eliminate Espedido after he has done his job. But then the Dutchman changes sides … 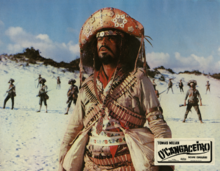 Unlike you may have read elsewhere, this is not a remake of a famous Brazilian film of ’53 with the same title (the plot is completely different), but Fago and his crew did seek some inspiration in that movie, especially for the costume design and couleur locale. The film was shot on location in Bahía, Brazil, and with his gay-coloured, carnavalesque costumes and scenes of swarming Brazilian street life, it definitely has a unique look within the subgenre of the Zapata westerns. Riz Ortolani integrated a traditional song Oh mulher rendeira, previously used for the ’53 Brazilian movie, into his exotic score, which also sounds like no other spaghetti western score.

That’s all wonderful, but still I feel reluctant to recommend the film wholeheartedly. As one member on an Italian forum put it, it is never dull, but doesn't really take off either. It is quite violent, but only once (in a scene with the cangaceiros slaughtering a regiment of federal troops) it reaches the intensity of some of the best Zapatas. And there are a few deficiencies in regard to the screenplay as well. For one thing there’s no Columba (The Mercenary) or Lola (Compañeros) in it. Those Corbuccian women never had predominant roles, but they were essential to the narrative in taking a central position between the two macho protagonists. There’s not much chemistry between Milian and Pagliai, and as a result the movie doesn’t benefit from their opposing acting styles. Pagliai is rather flaccid, which makes Milian’s idiosyncrasies look even more outrageous and over the top. The narrative is perfectly serviceable, but lacks the emotional depth and socio-historic relevance of Franco Solinas brilliant script for Petroni’s Tepepa, leaving us with a film that is fun to watch, but never really grabs you by the throat.

On the plus side, Alejandro Ulloa’s cinematography of the Brazilian locations is breathtaking, turning O’Cangaceiro into a true visual delight. And the film often is hilariously funny. The first part, with the crazy hermit and Milian roaming the countryside like a reincarnation of Christ, is of an absurdity almost worthy of a Buñuel or a Breughel. Milian also has some inspired moments when he becomes aware of his social importance as a teacher and redeemer of his people; there’s a wonderful moment in which he gives a chamber-pot to a small boy, and says: If you use this, you poop like the rich people. 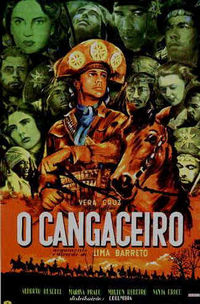 The 1953 film by Limo Barreto – of which Giovanni Fago’s film is NOT a remake – is one of the most famous Brazilian films of all time. It was shown in Cannes and was rewarded for best adventure film and got a special mention for the soundtrack. Barreto became a national hero and the theme song, Mulher Rendeira, became some kind of unofficial national anthem. The film also gave rise to the so-called Cangaço genre, a subgenre similar to the European Zapata movies. In style the films were strongly influenced by Hollywood westerns, especially those of John Ford. The cangaceiros were portrayed as tough, violent, yet noble men, while the governmental forces were presented as vile and cruel. Barreto’s film was followed by a number of cangaço westerns, of which Deus e o Diabo na Terra do Sol (literally: God and the Devil in the Land of the Sun; international title: Black God, White Devil) by Glauber Rocha is probably the most famous.

Barreto does not overstress the political matters in O Cangaceiro, as would some other directors (especially those of the Cinema Novo movement). The principal characters are Galdino, the leader of a group of cangaceiros, and Teodoro, who has joined the group after killing a man. The two men fall out when Galdino kidnaps a school teacher and Teodoro (who has fallen in love with her) decides to break away with the woman. In the mean time the police are on the trail of both the group and the two lovers. Galino’s men beat the police forces in a bloody battle, and then overtake Teodoro and the woman. Teodoro is shot and dies clutching a handful of ‘his’ earth, saying ‘a woman and land are the same thing, you need both to be happy.’ 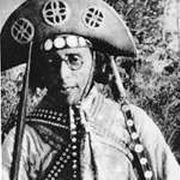 The term ‘cangaceiros’ is used to refer to bands of poor peasants who roamed the northeastern deserts of Brazil in the first decades of the 20th Century. They wore distinctive leather clothing and hats and were armed with both fire-arms and long narrow knives called peixeiras.

An alternative term sometimes used was bandoleiros, Portuguese for the Spanish bandoleros, a term originally referring to so-called Spanish ‘patriotic’ bandits, who distinguished themselves (and became folk heroes) while fighting against the soldiers of Napoleon during the occupation of their homeland. The Brazilian farmers were driven off their fertile grounds into the coastal deserts of the region by European colonizers. They soon divided themselves into two groups, the jagunços, mercenaries or hitmen who would work for whoever paid a good price, and the cangaceiros, social bandits supported by the poor.

The most famous cangaceiro of them all was Virgulino Ferreira da Silva, better known as Lampião (Oil Lamp). He joined the ‘cangaço movement’ after he had lost his parents in a family dispute. Although he was of low birth, he was a literate who wore glasses (very rare for a person of his descent in those days), and soon became the leader of the gang he had joined. Unlike most other cangaceiros he understood the importance of public relations: he gave interviews to newspapers and was always sure to be portrayed as a caring family man instead of a ruthless bandit (like some of his colleagues preferred). For years he managed to outsmart the volantes, ‘flying’ police forces charged to track down and eliminate the cangaceiros, but in 1938 he and his men were ambushed after an informer had told their location to the volantes. They were all beheaded and their chopped-off heads were publically shown to deter people from following Lampião’s example. In Giovanni Fago’s film there are several references to beheadings and Milian is filmed repeatedly as to suggest his head has been chopped off.

Lampião had exercised the profession of tailor before he became a cangaceiro and it was he who designed the distinctive cangaceiro hat. His face is still seen everywhere in Brazil, and he is often cited as a popular hero.