One After The Other Review (Scherpschutter) 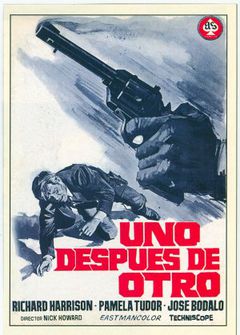 One After The Other

One After the Other - (view Database Page)

A bespectacled stranger rides into a town disputed by Mexican bandits and a corrupt bank director. Lots of action, a good dose of humor and a touch of the bizarre make this a very enjoyable genre entry.

When One After The Other was made, spaghetti western writers were running out of ideas, so they just threw in everything they could think of. Released in the same year as Parolini's (more famous, and far more influential) If you meet Sartana, Pray for your Death, it almost seems a companion piece to that movie. It even has a Sartana like labyrinth plot, with a multitude of twists and double-crosses, and a hero whose identity is more than a bit enigmatic until the very last moment.

The opening scene is pretty confusing. A bank president called Jefferson (Bodalo) is brought to the lair of Mexican bandit Espartero (Jose Manuel Martin), and is blackmailed (with documents that identify him as a traitor) to rob his own bank. So he does, but not with Espartero's men, but with his own men, dressed like Mexicans (the first, but most certainly not the last extraordinary plot twist). A bank employee is killed in the process, and when a bounty hunter called Stan pops up in town, Jefferson tries to convince him the Mexicans were the culprits, so this professional will track them down and erase all the traces in the process. Of course Stan soon finds out things are not what they seem... 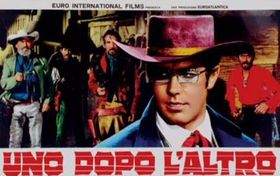 Stan is a gunman Leone style, manipulating - and being manipulated by - two warring factions, but he also reminds us of that other Sergio, Corbucci, as he's a handicapped - myopic! - hero fighting against heavy odds. Every character seems to have a hidden agenda and the Mexicans are as cunning and arrant as the Americans, the women as vindictive as the men. As a result there's hardly a dull moment, but I felt a little quaint about the shifts in tone. It starts and ends like a Sartana movie (well, a tiny bit more serious) but in-between there's a rather shocking (especially in this context) sequence with a massacred Mexican village, and the film's third and final act, Harrison's protracted vengeance, with Stan eliminating Jefferson's men one after the other, feels a bit like a horror movie.

In a contemporary interview the director declared he intended to infuse his film with a touch of the bizarre as well as a dose of humor and self-parody (1). He sure did. The moment in which Harrison unfolds his large collection of glasses in true Colonel Mortimer style is a highlight. This exemplary scene from For a Few Dollars More was imitated numerous times, but as far as I know, no one ever had the idea of doing it with an article as far out as glasses. The final scene, in which Harrison is outsmarted by his female accomplice, is also very nice. It's always good to see one of these untouchable spaghetti western heroes being reduced to human proportions - especially by a woman as nice as Pamela Tudor.

Harrison turns in a remarkably good, laconic performance as the spectacled gunman. Bodalo is also quite good as Jefferson, the racist bank president, who doesn't shy away from mass murder. Ironically both actors are almost unrecognizable: the glasses change Harrison's looks completely, and I only realized after some thirty minutes that Jefferson was played by the actor who played the Mexican bandit in Corbucci's Django and Vamos a Matar, Compañeros. One after the Other is a bit uneven, mainly because of these shifts in tone, but it’s a very enjoyable genre entry, way above average. To say you could do a lot worse within the genre, is quite an understatement.

Retrieved from "https://www.spaghetti-western.net/index.php?title=One_After_The_Other_Review_(Scherpschutter)&oldid=108830"
Categories:
Cookies help us deliver our services. By using our services, you agree to our use of cookies.