From The Spaghetti Western Database
Revision as of 21:37, 11 August 2022 by Mickey13 (talk | contribs) (Created page with "Review of '''One Damned Day at Dawn... Django Meets Sartana!''' (1970) aka '''Quel maledetto giorno d'inverno... Django e Sartana ...all'ultimo sangue!''' Director Demofilo Fidani (aka Milles Deem, Dick Spitfire and several others) has a reputation in the genre as being a hack who's given us some of the most unoriginal spaghetti westerns ever made. He doesn't disappoint us in that regard with his 1970 ef...")
(diff) ← Older revision | Latest revision (diff) | Newer revision → (diff)
Jump to: navigation, search

Director Demofilo Fidani (aka Milles Deem, Dick Spitfire and several others) has a reputation in the genre as being a hack who's given us some of the most unoriginal spaghetti westerns ever made. He doesn't disappoint us in that regard with his 1970 effort, One Damned Day at Dawn, Django Meets Sartana. And yes, as usual, there is no connection to the original Corbucci Django or the Parolini/Carnimeo Sartana films. It's yet another unofficial sequel. 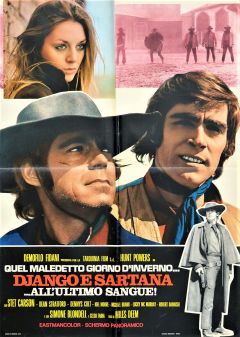 The film stars Fabio Testi as sheriff Jack Ronson, arriving in Black City from Denver. The sherrif's office is old, abandoned, and boarded up, as he soon finds. There's been no law an order in Black City for quite some time. Also in the beginning, we see a man in black in a graveyard somberly looking at a set of graves before he rides off into town. 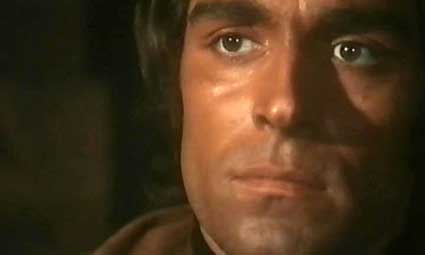 Fabio Testi as Sheriff Jack Ronson. who's really Sartana, but don't tell anyone.

We come to find that a town baddie by the name of Bud Wheeler (Dean Strafford) is more or less running the show in town, and is in cahoots with a local bandito named Sanchez (Benito Pacifico) with some kind of gun smuggling operation. Around this time, we start noticing the mysterious man in black, who turns out to be Django (Hunt Powers) is in town, keeping an eye on what's going on.

Wheeler tells the sheriff to basically get the hell out of town or else, and when he doesn't... he challenges him to an arm wrestle over some candles (yes, I'm not making that up!). The sheriff loses, and he challenges Wheeler to a gunfight the next morning. He's sort of a wimp, so that doesn't bode too well for him. Django visits him early the next morning and tells the sheriff how he must kill Wheeler, as Wheeler was responsible for killing his brother. The sheriff refuses and so Django locks him in jail, taking his clothes and dressing like Ronson. He goes out and shoots the whole gang down, getting at least 13 shots out of his one revolver. Amazing. 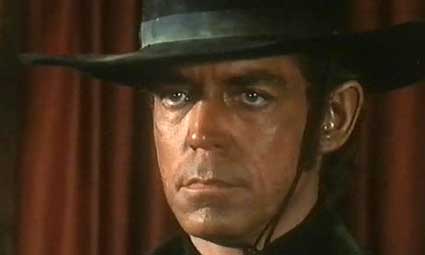 Of course, after this, the sheriff is now a hero, as everyone in town now thinks that he, not Django, took out Wheeler's gang. And then Sanchez, Wheeler's partner gets wind of his death, and once again, challenges Ronson to a dawn gunfight. This time, Ronson takes out Sanchez and his gang himself, with Django coming in at the last minute and saving his ass. At the end, Ronson reveals that his real name is Sartana, although we have no idea why he would have wanted to keep that a secret. So that was the "one damned dawn" they met at, apparently. 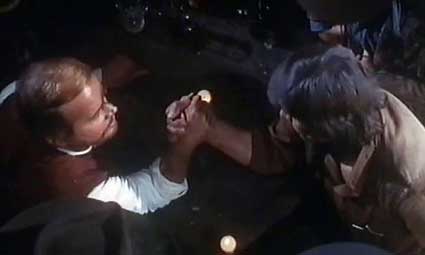 In the old west, they really settled things with manly arm wrestling over tiny candles, not gunfights.

Ok, although this film wasn't nearly as bad as I thought it was going to be, it's biggest flaws lie completely in its lack of anything even remotely original, as well as Fidani's apparent inability to convey any sort of suspense whatsoever on the screen. First off, the low-budget shoddiness and clichés are truly appalling. Powers is truly awful, with his fake sideburns, braindead dialogue, and he looks like he stole Django the Bastard's outfit, and then made a "Django Halloween Costume" out of it or something. When he first goes into the bar to pay for his beer, he throws a coin in the air, shoots a hole in it, blows the smoke from his revolver, and twirls it before putting it back in its holster. Yes, four clichés in less than ten seconds.

The several fights in the film go on way too long, with no suspense or direction... it's just two guys rolling around in the dirt, scrapping it up. The outlaws come into town yelling "yippie" and shoot their guns into the air. The long flashback sequences all have a ridiculous echo on them. And there's even a scene where they must have made a big goof editing, when Sanchez's gang rides quickly to town after hearing of Wheeler's death - we see them ride a bit into the distance, and then they all stop as the director must have yelled "Cut!", but kept filming. And in the final sequence, we hear the same coyote-howl sound effect looped about 10 or 15 times... it reminded me of a video game or something.

Event the Leone ripoffs are quite blatant, such as when this guy talks and the camera zooms quickly to his mouth for way too long (reminicent of the wagon scene in Duck, You Sucker! right before Juan Miranda robs the rich people). It's a good thing this guy's teeth were clean and there wasn't any food in his mustache. 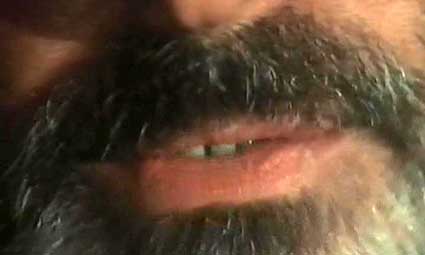 Fidani doesn't know how to do suspense at all. Both of the showdowns are completely bland and unexciting, and they're over before you even know what's happening, and you don't really care what does happen when it's all over.

Ok, I know I'm being harsh. With over 500 films, they can't all be good, can they? The soundtrack by Coriolano Gori was okay, with a rather memorable theme song. Although Powers' acting is atrocious, Testi is watchable, but other than that, I can't find much to recommend about this film. For completists and Fidani fans only.

Retrieved from "https://www.spaghetti-western.net/index.php?title=One_Damned_Day_at_Dawn..._Django_Meets_Sartana_Review_(by_J.D.)&oldid=132671"
Category:
Cookies help us deliver our services. By using our services, you agree to our use of cookies.