Difference between revisions of "Per qualche dollaro in più" 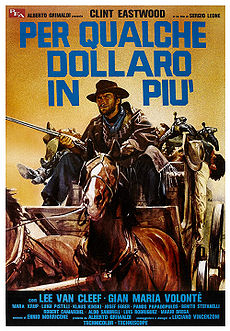 Clint Eastwood returns from Per un pugno di dollari playing a bounty hunter. In order to hunt mentally unstable bank robber Indio, played by Gian Maria Volonté, who has just escaped from prison he teams up with Colonel Mortimer, played by Lee Van Cleef. Together they set about infiltrating Indio's gang and after escaping to mexico following a bank robbery they must kill the gang and Indio to collect the reward. Colonel Mortimer has personal reasons for wanting Indio dead, which allows Leone his first use of the flashback sequences, and allows greater integration of the music into story of the film.

This pulse-pounding follow-up to Sergio Leone's A Fistful of Dollars brings back Clint Eastwood as the serape-clad, cigar-chewing Man With No Name. Engaged in an ongoing battle with bounty hunter Col. Douglas Mortimer (Lee Van Cleef), the Man joins forces with his enemy to capture homicidal bandit Indio (Gian Maria Volonte). Both the Eastwood and Van Cleef characters are given understandable motivations for their bloodletting tendencies, something that was lacking in A Fistful of Dollars. In both films, however, the violence is raw and uninhibited--and in many ways, curiously poetic. Leone's tense, tight closeups, pregnant pauses and significant silences have since been absorbed into the standard spaghetti-western lexicon; likewise, Ennio Morricone's haunting musical score has been endlessly imitated and parodied. For a Few Dollars More was originally titled Per Qualche Dollaro in Piu; it would be followed by the last and best of the "Man with No Name" trilogy, The Good, The Bad and the Ugly.