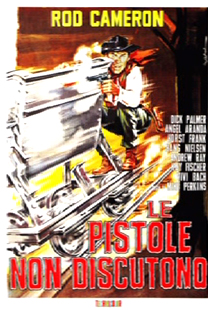 Sheriff Pat Garrett hunts down 2 brothers, who had robbed the local bank on the day of his wedding, in Mexico. The younger one helps him to defend the money against a bunch of bandits.

This early European western is most famous for being the one which was made by the same producers, with a much bigger budget, back to back with Fistful of Dollars, but then didn't make a great impression at the box-office, while FoD became the trendsetting hit. It's a simple, but likeable, and nicely directed film, which bears almost no resemblance to the Leone classic.

Was shot parallel to A Fistful of Dollars, partially on the same set, and at that time considered the more important, higher-budget film during production.