The world's first spaghetti western podcast! The SWDb highly recommends this as your regular Friday date. Tune in to Once Upon a Time in Spaghetti Westerns.

Second covered Bud Spencer Discussed western movies, only the ones in which they both play together: Other movies they made are not discussed/
Episode 42 - Live on March 19 2021

Show notes: Quiz about actors from TV westerns to Spaghetti Westerns. List of American actors that are mentioned:

Show notes: Continuation of episode # 33 and # 34 with more actors and movies. In this episode the next actors are discussed and honored:

A number of these actors do not have a separate SWDB page. By clicking on their image however more information is given.
Episode 34 - Live on January 22, 2021

A number of these actors do not have a separate SWDB page. By clicking on their image however more information is given.
Episode 33 - Live on January 15, 2021

Show notes:
Actors in Spaghetti Westerns not yet discussed in previous episodes. The life and movies are discussed of the actors. In this episode the next actors are discussed and honored:

A number of these actors do not have a separate SWDB page. By clicking on their image however more information is given.
Episode 32 - Live on January 8, 2021

Show Notes:
Hard to find films are defined by movies that are not available on VHS, DVD or BluRay. So no bootlegs or tv recordings or a theater copy.

Some of the movies above mentioned are available at YouTube. Search for original names or alternative names as mentioned in the database.
Episode 31 - Live on December 18, 2020

Show notes:
Los Hermanos Terron are 4 brothers (Pedro, José, Ángel, Victor) original from a circus. During filming El Cid they met famous stuntman Yakima Canutt and he helped them to start a career as stuntman. Their stunts and acting in different movies are shown by family photo’s and movie posters. Special homage to José Terron who did most acting. Additional there is a homage to Mike Bredell, real name Mihaly Orogovanyi. A professional wrestler turned actor.

Show notes:
Jeff Cameron played in approximately 52 films, a lot of them uncredited. The Spaghetti westerns that are discussed with him as an actor:

Show notes: The scheduled “Lee Van Cleef Special” has been rescheduled for Friday November 6, as special guest author, actor and film maker Mike Malloy is in Atlanta and has no power Jay shows parts from his poster collection and discusses the posters and films with Tom.

Show notes with a list of the worst spaghetti's:

Show notes: Anthony Ghidra made 119 movies of which 6 are Spaghetti Westerns.

Show notes:
Special guest on this show is Daniel Camargo, who made the documentary George Hilton - The World Belongs to the Daring and who also wrote the biography Anthony Steffen -biography Tohether with Daniel homage is paid to George Hilton and Anthont Steffen.

Show notes:
Actor Georg Wang, a Chinese actor who moved to Italy and stayed there as movie industry was booming. Discussed movies with him acting:

After the Spaghetti wester period Georg Wang went back to chine (Honk Kong) and started hiw own production company and started in karate movies. Actor Al Mulock, a little background about his life and ending is given. Discussed movies with him acting: During filming this last movie he decided to end his life. This is discussed in the podcast.
Episode 17 - Live on September 11, 2020

Show notes:
Special guest is Courtney Joyner, an American author, film script writer and director. As a director he gives his vision on the Spaghetti westerns and writers / directors of these movies. The discussed topics:

Topic of the show: A Fistful of Locations! The locations of the Dollars Trilogy then and now
Watch archived recording (85min): YouTube, Facebook

Topic of the show: Underrated directors are the topic of this fourth episode, as the podcast celebrates its first month.
Watch archived recording (min): YouTube, Facebook

Topic of the show: The show has a special guest, none other than Robert Woods!
Watch archived recording (min): YouTube, Facebook

Topic of the show: Underrated actors are a focus of this episode, plus some great posters and anecdotes as always. This week, stay for the encore!
Watch archived recording (min): YouTube, Facebook 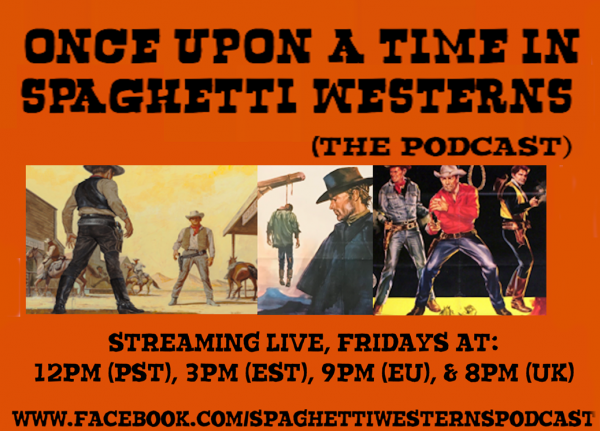 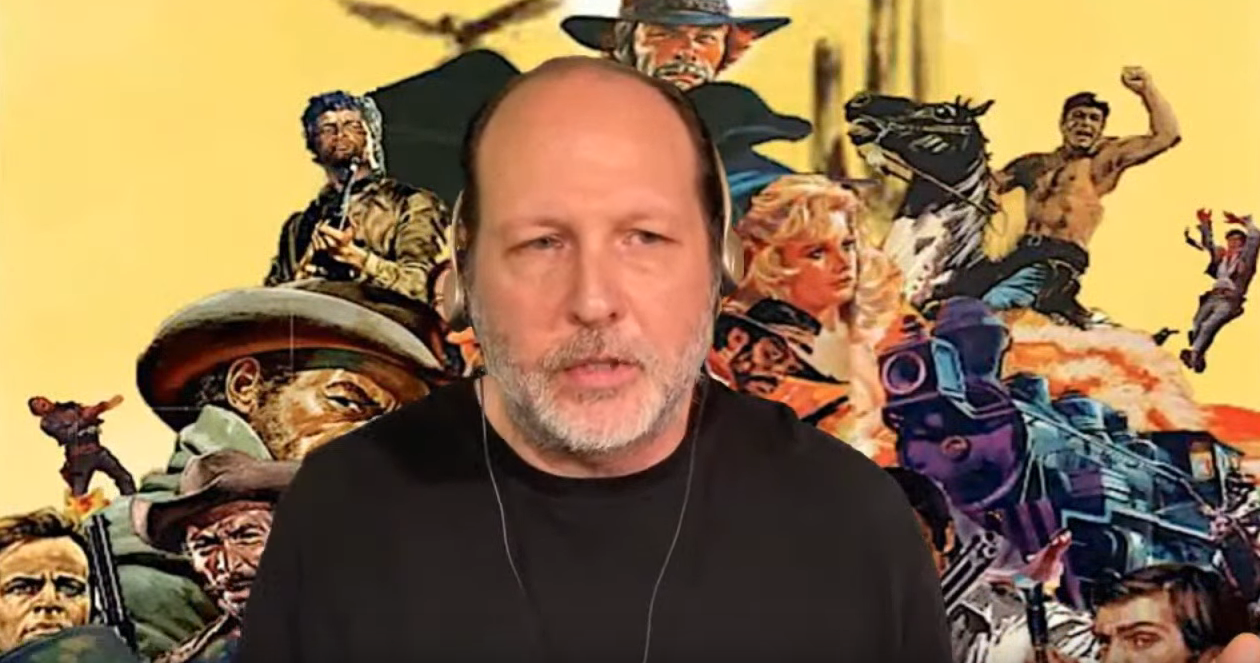 Jay Jennings is a poster collector, indie movie writer/director, voice actor and composer. More about him on Wikipedia 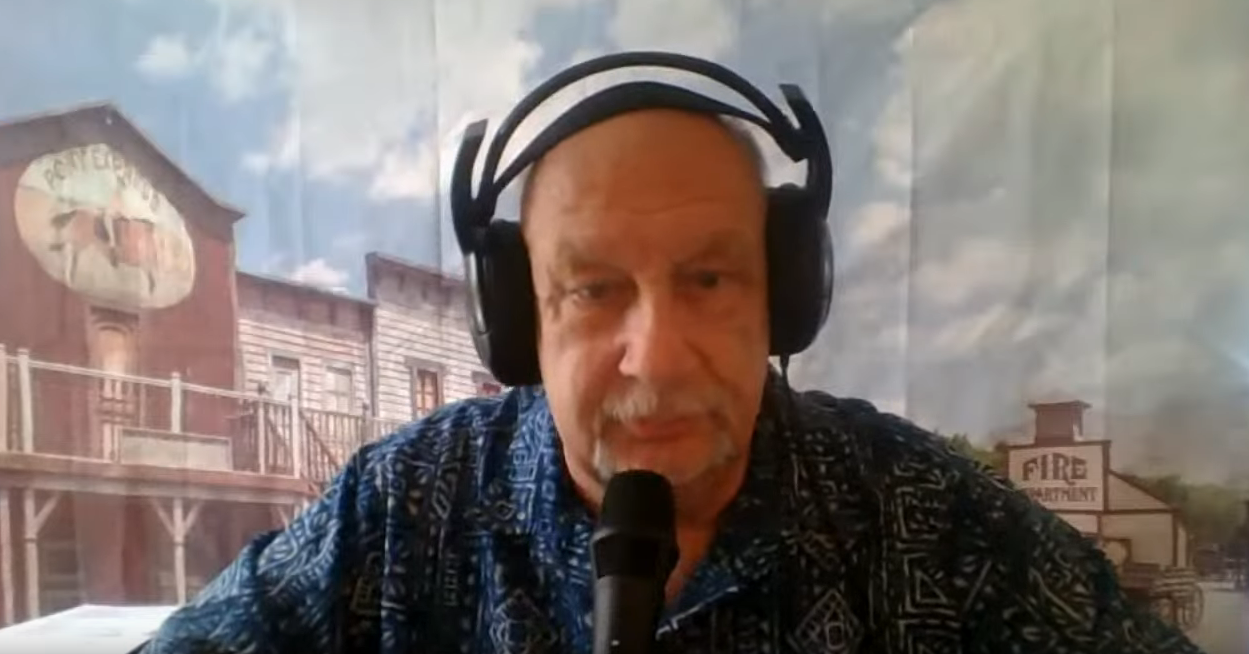 Tom Betts is a true spaghetti western expert and historian, long time editor of Westerns... All'Italiana!, the magazine founded by Tim Ferrante in 1983, and veteran editor at the SWDb as well as regular contributor to books, liner notes and documentaries. Tom's SWDb page

Disclaimer: This is an unofficial archive and reference page for this podcast. Show notes are not necessarily compiled in cooperation with the hosts. The podcast is not an official SWDb product or project, but wholeheartedly supported by it.