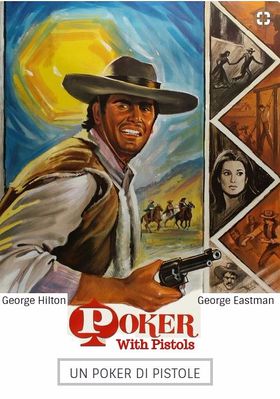 A minor, slow-moving but fairly enjoyable genre entry with influences of noir and the detective story. Eastman is a gunslinger-cardsharp hired by a stranger to do a job that will bring him in all kinds of trouble

A little-known, hard to find (*1) spaghie that seems to divide those who have seen it. Some think it's forgettable, others rank it among the best films of its director, Giuseppe Vari. It has both George Eastman (Luigi Montefiori) and George Hilton in fine form, and was co-written by Ferdinando di Leo, but it suffers from a limited budget and a script that often seems more appropriate to a thriller than a western. It's full of twists and sudden revelations, which makes it also hard for reviewers to write about the movie without giving too much away …

Lucas (Eastman), a professional card player who has stripped most townspeople of their savings, is challenged – and beaten – by a mysterious passer-by called Terrail (Hilton). Completely cleaned out, he borrows money from a Mexican called Lazar (José Torres), but is again beaten by Terrail, who makes him an unusual offer: he is willing to pay Lucas’ debts to the Mexican if Lucas, in return, is willing to bring a wagon containing a useless load of paper (!) to the town of Chamaco. Lucas accepts the deal (even though he knows there must be a catch) and soon he is in all kinds of trouble: the wagon is held up by a gang of Mexicans and the town of Chamaco is controlled by the shady businessman Masters (Mimmo Palmara), who doesn’t like people nosing around …

I’ve never been a fan of poker, and in this case I don’t mean the game itself, but the scenes of poker games in spaghetti westerns. They tend to hold up the narrative and are often merely a waste of time. Director Vari uses unusual angles and compositions to enliven the drawn-out poker and gambling scenes, but the detract from the ‘noirish’ story-line, with Eastman representing a western counterpart of the shady detective wandering about in a world in which nobody can be trusted, except (maybe) that one angelic girl (Annabella Incontrera) begging for help. When she tells him her father disappeared years ago under mysterious circumstances, you know he will pop up later in the movie and that his character is part of the plot. 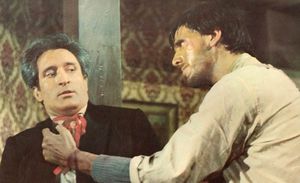 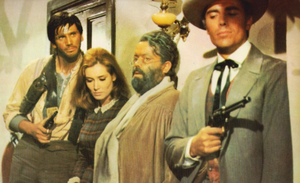 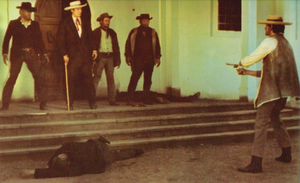 Vari directs well, but Poker with Pistols belongs to the actors. Lee van Cleef lookalike José Torres (he probably had his finest hour in the famous opening scene of Any Gun Can Play) is the mysterious man in the background, Incontrera the damsel in distress and Palmara a typical slimy and calculating villain. Hilton is cast against type as the ambiguous stranger hiring Eastman. His restrained performance is spot-on, but it’s Eastman who steals the show. He is a very underrated actor (and writer of the original story of Keoma), whose career was severely harmed by the fact that some stars refused to work with him because of his tall stature. The film has a rather cheap look (Demofilo Fidani was responsible for the set design!) and it's also a bit top-heavy, with nearly all the trump cards (including a crucifixion scene and a shootout at the villain's lair) played out in the final 20 minutes. Eastman seems to have practiced a lot with the gun, which lends a special flair to the smaller action scenes that are thrown in here and there to liven things up a little.

Simon Gelten is a long time contributor to the SWDb. "I'm not as old as Tom B. but I'm working on it. I hope to catch up with him by the end of the next decade.", he says. Simon saw all movies by Sergio Leone and several by Sergio Corbucci in cinema, most of the time in Eindhoven, the city where he was born. Currently, Simon is living in Turnhout, Belgium. Simon is active within the database as both Scherpschutter and his alter ego Tiratore Scelto.
Retrieved from "https://www.spaghetti-western.net/index.php?title=Poker_with_Pistols_Review&oldid=122101"
Categories:
Cookies help us deliver our services. By using our services, you agree to our use of cookies.