Young George (George Eastman) returns to his brother Johnathan's (Ty Hardin) farm and marries his fiancé Lory. But happiness doesn't last long: The Fargas brothers (among them Bruno Corazzari) provide a bloodbath at the ranch and kill George's brother and wife. They are able to divert suspicion from themselves but nevertheless they can't run from George's revenge. One of his family has survived the massacre and knows who the actual killers are. Now George tries anything to atone for the terrible crime.

The DVD case's text sais "This Italowestern by Sergio Garrone does mainly impress by its cast of well known names such as George Eastman, Bruno Corazzari and Nello Pazzafini." This is very true because the great cast is (almost) the only impressing thing about this movie. First of all the title song "Walk by my side" is taken from 'Il momento di uccidere' and the rest of the soundtrack is taken from different de-Masi-scores (e.g. Il ranch degli spietati) as well. Don't get me wrong, I like de Masi's scores, they're among my favourites but in this case no new, individual soundtrack is presented. Secondly, the first half of the movie is pretty boring, practically an overlong introduction of the characters. The good acting by the interesting cast kind of makes up for those lame 45 minutes though. Bruno Corazzari (oldest of the Fargas brothers) for example is playing a really vicious bastard, killing and raping coldbloodedly. After the marriage of Lory and George the real story starts and the movie takes up pace. Some brutal scenes are presented while George is hunting down his wife's and brother's murderers. First he's on the wrong track and suspects Nello Pazzafini and his gang to be the killers. The sheriff (Guido Lollobrigida) prevents George from killing the wrong guy with the words "As a doctor you are supposed to save lives and not to take 'em". Finally, George gets the chance to take bloody revenge on the real murderers and does so in an impressive fashion. Only the very ending is kind of disappointing in my opinion but you'll have to see for yourself.

'Quel maledetto giorno della resa dei conti' is Sergio Garrone's last Spaghetti Western and certainly not among the top Spaghetti Westerns, not even among the director's best contributions to the genre. It's more or less an average movie. The fact that the movie did not have a (German) video release, was only shown on German pay-tv and now is released uncut on DVD for the first time worldwide makes it very interesting for the fan. The cut scenes are very few though and are instantly recognized by the worse picture quality. Not a real plus. The only thing special about this flic is the great cast. You'll recognize lots of familiar faces. The DVD is limited and available in three different covers. Picture and sound are of good quality and quite satisfying to eye and ear. Extras are very slim, only 6 Italian lobby cards and unfortunately no trailer etc. ! Overall I would recommend the film to real fans only. Genre "rookies" probably would be disappointed and should watch top 20 movies first. 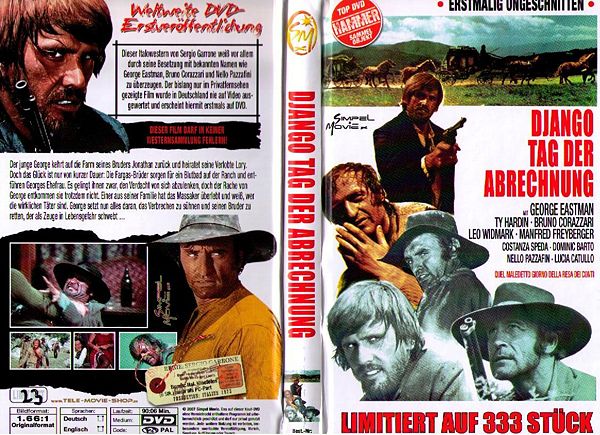