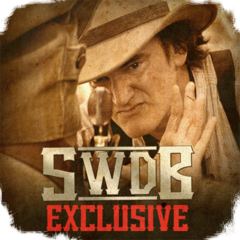 The SWDB is the first sister site of The Quentin Tarantino Archives that was launched and it didn't take long for the director himself to admit his admiration for this site. It has been a huge success on the internet and a beloved location for fans around the globe to exchange ideas about these classic movies and do research. Our own Top 20 has not gone unnoticed, so the director took some time out of his schedule while shooting Inglourious Basterds, to submit his own personal Top 20. Enjoy.

"It is a cold January afternoon on the Babelsberg studio lot a few minutes outside Berlin. The sun is out and it's nice, but there's a cold wind blowing. As we walk across the snow-covered streets I'm reminded of The Great Silence, but silence is not what I'm here for. I sit down with Quentin Tarantino so he can brief me on his personal twenty most favorite spaghetti westerns (rather unexpectedly I have to say, as his current project was all that was on my mind at that moment). This is an authoritative list he had compiled meticulously after having read the SWDB's Essential Top 20 Films (which is calculated through a complicated formula from people's personal top 20 lists). The cineast and filmmaker, lists and discussing favorites having been part of not just his video store past, and who's currently shooting Inglourious Basterds, also added a few more films that didn't make it into his top 20 but are runners up. Ladies and gentlemen, get out your own personal lists and compare, for this my friends, is Q's list ..." - Sebastian Haselbeck

The runners up in not so strict order:

...and to quote Quentin

Thank you for reading and thanks to Quentin Tarantino for sharing his list.

This page is exclusive content. No unauthorized reprinting, republishing or other use without prior authorization or proper referencing. © 2009 - 2017 The Spaghetti Western Database.