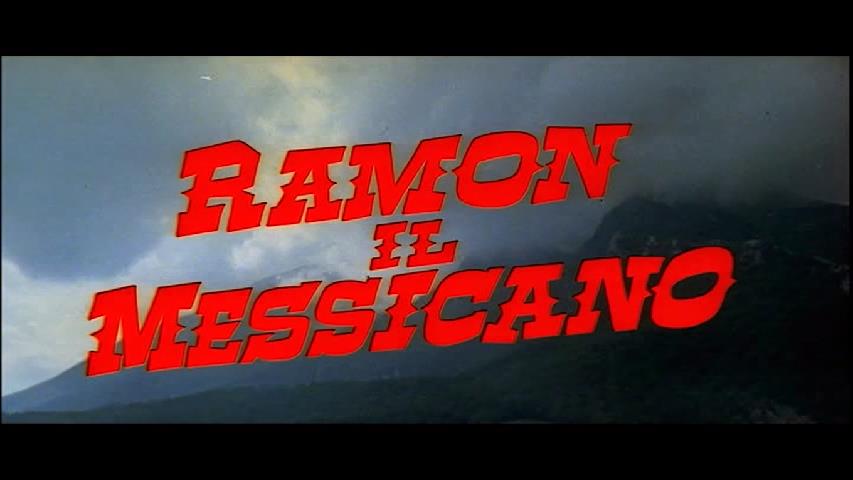 This film an obvious derivative of Sergio Leone’s A FISTFUL OF DOLLARS, that pales in comparison, and while a good film, it struggles under the weight of the film, from which it borrowed heavily. The title RAMON THE MEXICAN, is an obvious nod to the Ramon Rojo character from A FISTFUL OF DOLLARS, and while Robert Hundar, does a fine job as the title character in RAMON THE MEXICAN, he is not in the same league as the brilliant actor Gian Maria Volonte. The family that must face the wrath of Ramon the Mexican and his men, are a family called the Baxter's, which was also the name of the Gringo family in A FISTFUL OF DOLLARS, who oppose Ramon and his family. There is also a woman caught in the middle, named Esmerelda, who must leave the man she loves, Slim Baxter (Jean Louis), to live with Ramon, because he had raped her…making her a sinner in her own eyes… and after entering into a pact with the Virgin Mary to return to the place of her sin, if Slim is allowed to survive, shades of the dilemma that Marisol (Marianne Koch) in A FISTFUL OF DOLLARS, had to withstand. 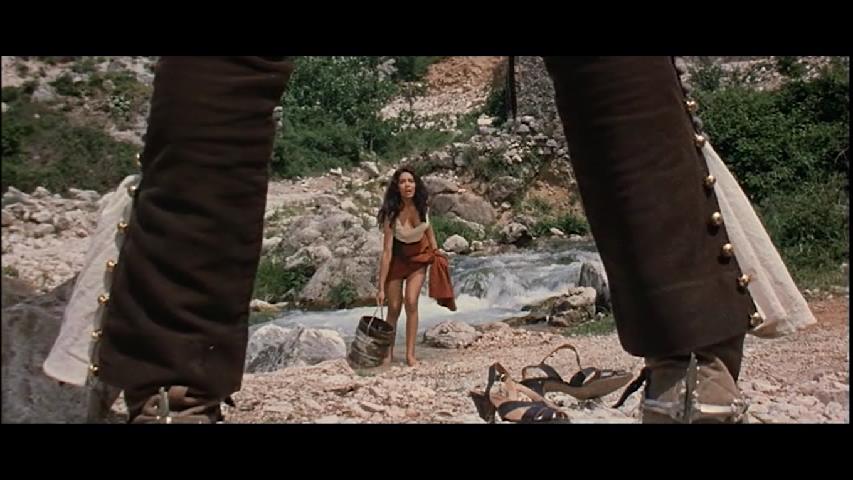 The film starts with an attempted rape of the beautiful Esmerelda (Vilma Lindamar), which ends with Juan Morales dead with three bullets in his back, after being shot by Slim Baxter, who had come to the aide of his brother John (Ugo Sasso), who had arrived after hearing Esmerelda’s screams and had attacked Juan, but was in line for a belly full of lead from Juan, before Slim's intervention. The decision is made by the Baxter patriarch to have Slim hide in the hills and for John to proceed upon his journey to Tucson, and to seek out the local judge there for help dealing with the death of Juan. Ramon after hearing of his brother’s death, decides to wreak havoc on the Baxter clan, and leads his bloodthirsty gang to the Baxter ranch, and shoots the father of the Baxter’s dead, and takes Esmerelda hostage… holding her until Slim returns to face Ramon in a showdown, man to man. The duel between Ramon and Slim is strictly one-sided as the must quicker Ramon draws and puts a few slugs in Slim’s gut… before, he can even pull his colt from its holster. Esmerelda, after nursing Slim back to health, upholds her end of the bargain, with the Virgin Mary, and returns to Ramon to marry him! Slim is now on a path of destruction after recovering his health, consumed by hate, seeking revenge and still hurting from the unexplained loss of his beloved Esmerelda to his rival Ramon. 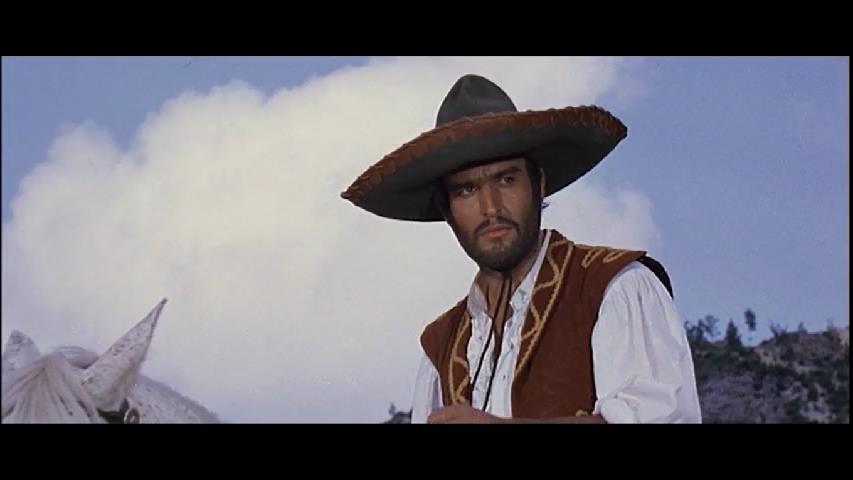 While seething for revenge Slim, falls in with a gang of outlaws, until he is called away, when his mother becomes sick. On her sick-bed she pleads for Slim to forget his quest for revenge and Esmerelda. After agreeing to this, he and John depart the family ranch right before Ramon attacks the ranch, after Slim had killed two of Ramon’s sidekicks in a fiery wagon explosion. Slim’s mother dies from the stress of the attack by Ramon and his gang, and everyone at the ranch is ruthlessly cut down. John who has returned to the ranch after taking Slim to his hideout in the mountains, rides into the aftermath of the massacre, and goes into town to challenge Ramon, which ends badly for John. With the news of his brother’s death, Slim returns to the outlaw camp, and with the aid of Jack Castro (Aldo Berti), works on his quick-draw skills, for his inevitable showdown with Ramon! 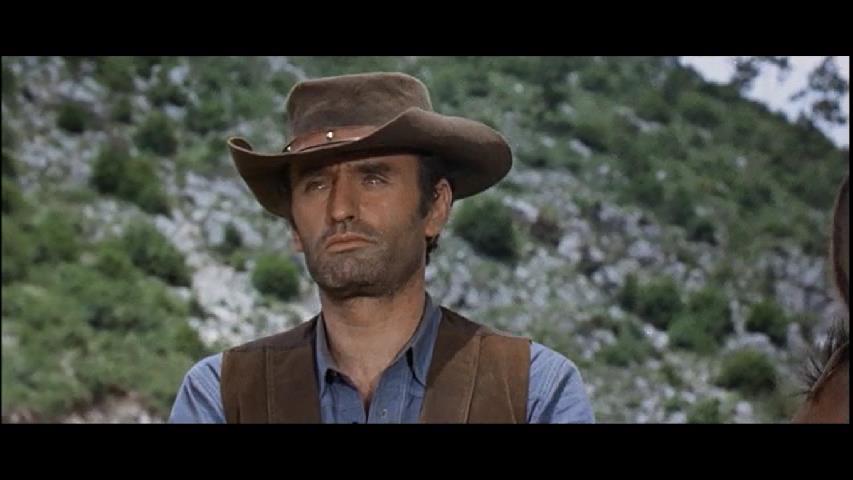 RAMON THE MEXICAN is a solid enough film, but the comparisons to A FISTFUL OF DOLLARS, really hurts the overall product. The direction by Maurizio Pradeaux (who also wrote the film) is lax, and the film was in dire need of some cuts, to shorten some scenes, and when aligning yourself with a film like A FISTFUL OF DOLLARS, some stylistic flair and macho posturing is needed, and this film has very little of either. The film also has some heavy doses of overlong melodramatic scenes, and left many things unexplained… and the narrative seemed to jump about, appearing to include situations only as filler to fill out the run time.

Robert Hundar as Ramon, really makes this film in my eyes, he does not overplay the Ramon character, and while some of his gang took on the stereotypical laughing, grinning sadistic Mexicans, these films seemed to show many of the male Mexican bandits as… Hundar’s refined, contained performance is the bond that saves the film from falling into boring chaos. The two film appearances, out of many in Italian westerns by Robert Hundar, that stand out in my Spaghetti obsessed mind, would be as Sgt. Brown in Joaquin Luis Romero Marchent's CUT-THROATS NINE, and as General Munguya in Giuseppe Vari's A HOLE IN THE FOREHEAD (Buco in fronte, Un)! Jean Louis is a decent actor, but made for a pretty dull hero, Louis is much better suited as a character actor, and is best known for his performances; as Howard Ross in DJANGO THE BASTARD (Django il bastardo), Murdock in TRINTIY IS STILL MY NAME (Continuavano a chiamarlo Trinità) and as Wal in the Sergio Garrone western-horror film VENDETTA AT DAWN (Quel maledetto giorno della resa dei conti). 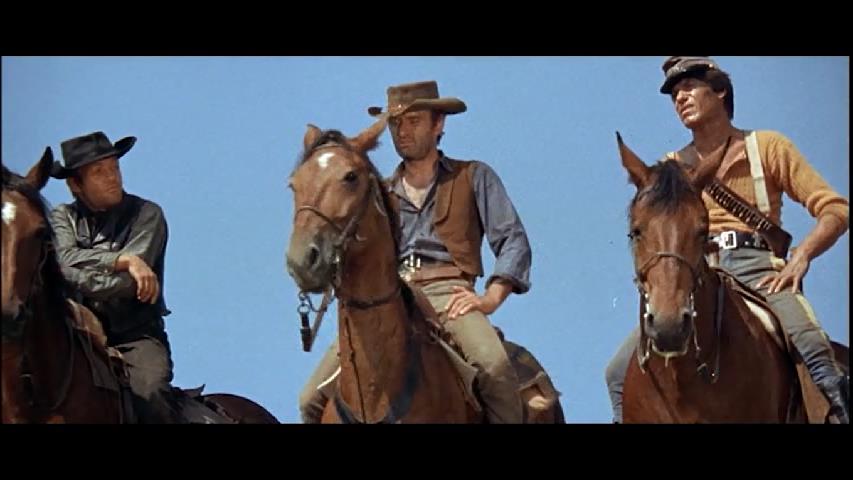 Let me say this… The print used by Wild East Productions, is amazing. Besides a few bits of grain here and there, the print is damn near perfect, and really shows off the wonderful cinematography by Oberdan Troiani, who is best known for his work on the peplum’s HERCULES AGAINST THE MOONMEN and THE GIANT OF METROPOLIS. Troiani, also performed the cinematography on a few other Italian westerns including the Gordon Mitchell starring BORN TO KILL (Nato per uccidere), DAKOTA JOE (Hombre y un colt, Un), again starring Robert Hundar, and the Gianni Crea film LAW OF VIOLENCE (Todos o ninguno), among others.This is Maurizio Pradeaux's only Italian western directing credit out of the seven films he helmed, he did though receive a credit for contributing to the screenplay of the 1972 western SENTENCE OF GOD. The score by Felice Di Stefano, is effective, if not unmemorable, with its borrowing heavily from Ennio Morricone’s A FISTFUL OF DOLLARS score. This film is one that I had never seen, and has been on my radar for many years… while not a classic, it’s a decent enough entry that is another fantastic release from the great Wild East Productions. Also on this twofer from Wild East, is the great, late in the cycle, Giuliano Gemma film CALIFORNIA directed by Michelle Lupo, along with trailers... and both films are presented here in Widescreen Anamorphic presentations! You can’t go wrong with this twofer…(Wild East DVD catalog) 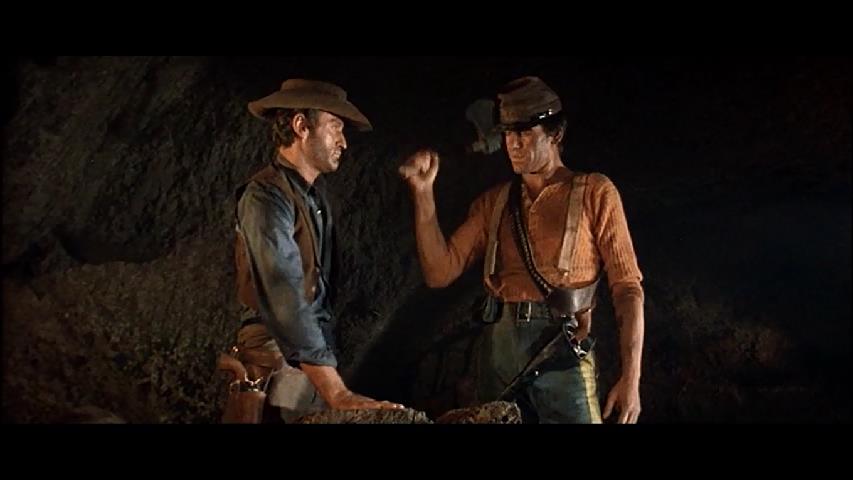 Not yet listed on Amazon. You can order it directly from http://www.wildeast.net

Article written by Michael Hauss, author of reviews and articles for Monster magazine, We Belong Dead, Multitude of Movies, Divine Exploitation, Exploitation Retrospect, Weng's Chop and various blogs that include Multitude of Movies, Theater of Guts and the SWDb. He has a love of film with particular interest in the Spaghetti Western and Horror genres. Michael lives in the United States where he resides with his daughter and their two cats Rotten Ralph and Fatty boo-boo.
Retrieved from "https://www.spaghetti-western.net/index.php?title=Ramon_The_Mexican_-_Wild_East_Productions&oldid=107431"
Category:
Cookies help us deliver our services. By using our services, you agree to our use of cookies.