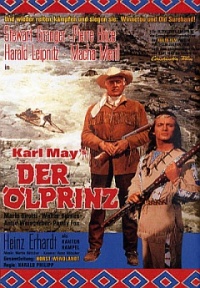 The second of three Rialto films with Stewart Granger as Old Surehand, and one of the few Karl May movies based on an actual novel, Der Ölprinz has a bit more story than most other adaptations, but is otherwise standard Karl May Stuff about money hungry villains, renegade Indians, and Old Surehand and Winnetou preventing a massacre. Director Harald Philipp had to work with a fairly limited budget and could therefore not work out some of his plans. Originally Lex Barker would've been in the film too, but Philipp couldn't afford both Granger and him. He was also forced to use scenes from previous films. For the oil fire in the opening scenes, stock material from Winnetou II was used, and in a nice gesture, rivaling production house CCC (who had started their own series of Karl May movies) offered Philip the use of some of the old sets for Old Shatterhand to create the western town of Chinlo.

Harald Leipniz is the oil prince from the title, a sneaky villain who sells worthless claims to rich people. His plans are interfered with by a travelling group of settlers, so he has their wagon master killed and replaced by one of his own men. But Winnetou and Old Surehand are on his trail and discover what has happened. Winnetou offers to replace the dead wagon master, but then the oil prince kills the son of a Navajo chief, and puts the blame on the settlers ...

It took Granger one more film to grow into the part, but he seems to enjoy himself quite well here. With an eternal grin on his face, he adds a touch of irony to the series, much to the discomfort of Brice, who took the films dead serious. For Brice it was a rather difficult production, he nearly froze to death during the raft scene because he refused to use a protective diving suit under his clothing, and hurt his right hand so badly he could not use his famous silver rifle during the entire film. On the positive side he discovered that he had a hobby in common with actress Meril, who was, like Brice, a passionate cook. Der Ölprinz is a slightly above average entry in the series, but its conclusion, with Old Surehand proving the innocence of the settlers, is particularly stupid, and unfortunately the film squanders the character of Old Wabble (Fox), one of May's most interesting creations. Unlike most other May characters, the 90 year old Old Wabble is two-dimensional, a grumpy, but basically good-natured old chap, knick-named the King of the Cowboys, who slowly evolves into one of the most fervent and dangerous opponents of our heroes. But here he is only used as a sidekick. Although he appears in the Surehand novels, he is becomes the arch enemy of Old Shatterhand, mainly because of some differences over the Christian faith: Shatterhand is real bigot, Old Wabble has lost all faith in God. Like most Karl May adaptations, the film is beautifully shot on magnificent Croatian locations. The raft scene could've been great, but unfortunately scenes shot on location, are alternated with scenes shot in the studio, against the blue screen, the actors jumping around in the splashing water of a giant bathtub. Terence Hill and Walter Barnes have their usual cameo appearances and Harald Leipniz turns in an excellent performance as the slimy heavy, a guy who probably could sell ice-cubes to the Inuit.

The fact that the storyline is a bit closer to the original Karl May story, has a rather unwelcome side-effect. There has been a lot of discussion whether May's novels - who were popular among national-sociali*ts - propagated a questionable, racist philosophy or not. Karl May sure thought of native Americans as admirable natural men, but the basic idea of his stories about the sophisticated Indian versus the renegade Indian, is that the good Indian, is by definition an Indian who tries to be as white as possible, by adopting the white man's way of life and religion. In the novels this is far more emphasized than in the films. We have grown up with the likes of Shatterhand and Surehand, so we can accept, more or less, their superiority, but in Der Ölprinz there's one scene with Winnetou talking to the Navajos, telling them they have to give their land to the white men, because they can teach the Indians a lot and are so good to them. It's quite painful to watch.