Retrospective review of Companeros on BluRay 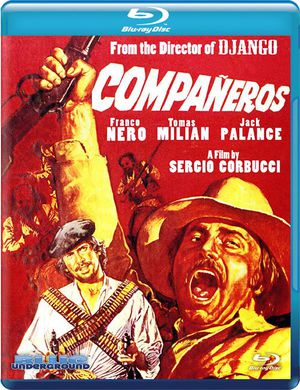 There is certainly no shortage of reviews of Sergio Corbucci's cult classic Companeros at the Spaghetti Western Database, as the movie's database entry illustrates. The US BluRay disc by Blue Underground as well as one of the many releases and re-releases of the movie on BluRay in Germany (more on these further below) have been sitting on my shelf for far too long, so Spagvemberfest was a welcome incentive to finally watch these and rediscover the movie after all these years. Having put some distance behind it and myself would certainly allow for an interesting revaluation, the last time I had seen it must have been five or ten years ago and I know a lot more spaghetti westerns now than I did back then. Deutsche Version dieses Artikels lesen

Story: the Swedish arms dealer Yodlaf Peterson (Franco Nero) is on his way to meet the pseudo-revolutionary bandit Mongo (Jose Bodalo), who is driven less by socialist or patriotic ideals than the prospect of looting the public purse. He promoted a simpleton, the Basque (Tomas Milian) as his Lieutenant, who is quickly falling in disgrace when he is unable to prevent leftish insurgents, the Xantists, from meeting the Swede. That group is led by Professor Xantos (Ferdinando Rey), who is jailed in the United States, from where the Swede and the Basque are sent to break him out of because he is the only one knowing the code to the bank vault of San Bernadino. Mongo needs its content to pay the Swede for his delivery of arms. In the fog of the revolutionary war however, the Basque is warming to the ideals of the Xantists, especially of their local leader Lola (Iris Berben). After a daring prison break they are on the run with the professor towards San Bernardino. A showdown ensues, which Amercan agents, led by John (Jack Palance) attempting to foil....

After all these years the movie leaves a positive impression on me. The bigger budget and self esteem becomes Sergio Corbucci's work here visibly. Despite the two hour running time the movie never gets boring and each shot is a careful composition. The cast is spot on - and yet one cannot shake the feeling that Corbucci's main attempt here was to try once more the topic of the movie made shortly before that has the exact same concept: The Mercenary. Instead of Tony Musante we have Tomas Milian as the involuntary hero of the revoltuion, and Milian might have done a better job than Musante, too, but at the price of that movie's serious tone. Companeros is a far more light hearted affair than The Mercenary, which has a more serious, epic and heavy air. Companeros seems to be more political, too, on its surface, even though the more overt messages seem toned down. While Nero in his role as the Polack got to explain the concept of a revolution to Musante's character on the bare back of a beautiful lady, this time he is just the Swede, a soldier of fortune, and it is the professor who teaches peaceful resistance to Milian's character. To cut a long story short: Corbucci sheds new light on an old premise, and it works, once again it's a great revolutionary western, not merely a lukewarm remake.

A substantial difference between the films is also the depiction of women. The great Giovanna Ralli in The Mercenary plays a gritty resistance fighter, proud and brave, but degraded to the sidelines by the script. Iris Berben however, despite relegated to the simple country girl by the script and having her breast exposed in the opening sequence - assumes the moral highground throught the movie, consistently. There is never ever a doubt about her character, she is not a femme fatale but the beacon. A diferent fate befell Jack Palance whose role here is a far fall from his performance as Curly in The Mercenary. He appears every now and then, with greasy hair, smoking joints and with a falcon as his pet, as the walking metaphor for the constant geopolitical meddler in other countries' affairs.

One of the biggest weaknesses of Companeros in my opinion is the soundtrack by Ennio Morricone. Aside from the battle cry that serves as the title theme of the film, which certainly got carried from theaters to bars and into the streets by my parent's generation back then, the score does not have much to offer. It consists of known motifs from Ennio's tool box, but far from the eternal, goose bump inducing tunes from The Mercenary or the greatness and crescendo you can hear in Tepepa. Which brings me to another aspect that has gotten me thinking over the years: Milian and Orson Welles deliver a fabulous duel of sorts as protagonists in in Petroni's revolutionary western Tepepa, which - my hypothesis - belongs to the overlooked films of the genre but probably is one of the best as well. Tepepa's niche status might have something to do with its status as a hard to get title over all these years. From today's perspective, I would cautiously say that I prefer Tepepa over Duck, you sucker!. But I digress...

Companeros is, and was, a great little movie, which succeeds at pushing all the audience's right buttons and struck a chord during the times of its release. No wonder it was a hit in Germany when it came out - it was oozing the spirit of '68 and the student movement. Unfortuantely it does so in a bit of a clumsy and superficial kind of way. Companeros is, pop culturally speaking, mainstream cinema, while I would go as far and call The Mercenary a genre film, or the genre film out of the two of them at least. The Mercenary is no less political, but it is heavier stuff, which is wrapped more eloquently and extravagantly in an epic adventure. With Companeros, Sergio Corbucci showed what he could do, minus the air raids, and he ended the movie with a bang and also with a rallying cry: Europeans, side with the revolutionaries. Historians may correct me, but: he could not have been more specific, for its time this movie was almost like a pamphlet.

Now for the BluRay, or rather the BluRay discs (I am publishing this text in English and German, each focussing on the respective main release in comparison with the other).

The US BluRay by Blue Underground (pictured at the beginning of the article) comes without a region code, which makes it a real alternative for international buyers. The disc goes the way of a selection after starting the disc (you'll see later how the German disc handles the versions): start Companeros, the English version at 115 minutes aka the US theatrical cut, or Vamos a Matar, Companeros, the Italian version at 119 minutes aka the uncut original version of the film. Select the US version and you get English, French and Spanish subtitles even. Select the longer version, and there is but the option left to select English subtitles for the Italian audio. The US cut has English audio, the Italian cut of course the original Italian audio (as DTS-HD mono) and - this is interesting - also English.

The audio sounds perfectly fine, no matter which track you chose. It's a straight up mono track, so it might feel a bit flat at times, but it'll do the job really well. The picture transfer is okay, but it suffers from too strong digital noise reduction and the picture thus ends up being extremely soft and poor in detail. There's a smudging effect that is quite a shame, because the picture seems to stem from a rather good scan. The colors are rich and it's a beautiful cinematogrpahy. In comparison to the German disc (see below) I have a feeling that it's just slightly darker. Unfortunately I do not have a direct screenshot comparison to offer.

What sets this release apart is a great audio commentary with C. Courtney Joyner and Henry Parke. The commentary is well informed and entertaining, and in general there aren't too many spaghetti western releases that offer commentaries, that this alone is worth mentioning. If you already know a lot, this won't be a revelation but it offers some interesting perspectives on the movie, because they did their homework and do a lot of analysis, on stylistic devices and storytelling for example. There are some more extras though. "In the Company of Companeros" is a 17 Minute interview featurette with Franco Nero, Tomas Milian and Ennio Morricone, which is a number of years old but still great to see these legends talk about this movie. Then there are some trailers, TV spots and a gallery. 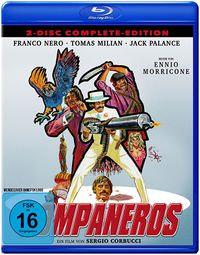 There is a 2017 re-release (there have been many) by "DigiDreams" which ditches some of the extra features and cruft from previous releases and offers value for the money (this applies to most titles from their "Complete Edition" line: if you need nothing fancy and if you can stomach their image transfers, it's for you). It offers the uncut long version of the film which is offered in German or Italian (both in either a 5.1 upmix or a 2.0 mono track) as well as the US theatrical cut (selectable from the extras menu just as the useless German comedy dub).

The picture quality here is okay but suffers from the same problemes described above (here they are unfortunately a common sight with this label): too much DNR and a washed out picture. It seems to be brighter than the Blue Underground presentation. The sound (here I tested the 5.1 upmix in German) sounds solid aside from some minor glitches and offers a rich theatrical experience without the audio seeming tampered with too much. It's still mono, it's just coming from more speakers, there's no surround or stereo effect. There's optional German subtitles (no English subtitles) along with the Italian version or audio. However, if you select the US theatrical version from the extras menu, you will watch (just like on the BU disc) that version with English audio. There's also the German comedy dub, hidden in the extras menu as well, but since that version, modified and about 15 minutes shorter, does not exist it is put over the long version and some parts were filled with the Super8 Version apparently, which is missing from this disc as a separate option (it was included on previous releases).

There are only few extras on this disc, which by the way looks not nearly as nice as an edition by '84 Entertainment by the way. It's a very plain release. There are some trailers, filmographies as text slides, a photo novel and some galleries (artwork, posters). The strangest extra is a "Start movie with PAL-speedup" option, which not only makes little sense on a BluRay but is also just plain useless. It's a decent disc overall for the money, but I'd hope for a re-release some day that gets more out of the material and leaves the picture without a heavy digital smudge, but that goes for the US release as well. English audio as a option for the longer version would also have been nice, they could've just offered the english opening credits as a bonus feature, too.

Conclusion: the US disc is the better product, but there is room for improvement. It would have been wonderful had they licensed additional audio tracks, e.g. the German one, or offered all their subtitles for both versions.

Written by Sebastian. Screenshots via Blu-Ray.com

Retrieved from "https://www.spaghetti-western.net/index.php?title=Retrospective_review_of_Companeros_on_BluRay&oldid=123638"
Category:
Cookies help us deliver our services. By using our services, you agree to our use of cookies.