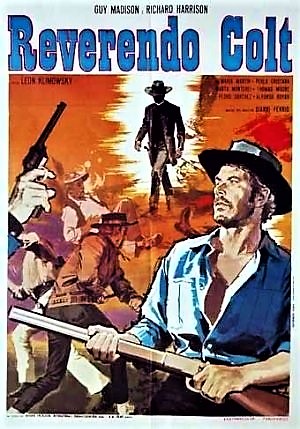 On the surface, when one stops to consider Reverend Colt there is a whole lot to like. Though the opening credits assure the viewer that the film was directed by Leon Klimovsky, the man behind the lens for this particular bit of cinema was in fact Marino Girolami who was responsible for such classics in the poliziottesco genre as Violent Rome (1975), Rome: The Other Side of Violence (1976), and A Special Cop in Action (1976). In addition to a director who is no stranger to creating satisfying violence, when one adds in the presence of spaghetti western regulars Guy Madison (his last top billing in a film) and Richard Harrison, the elements are in place on paper for a truly promising Italian Western.

The opening scene of the film only adds to the promise as it begins with a saloon girl entering a room where Madison lies sleeping in his bed. Being a grizzled veteran of numerous western films, as well as eight seasons holding down the lead role in The Adventures of Wild Bill Hickock, Madison quickly becomes aware that someone is in the room but wisely continues with the illusion that he is sleeping. The promise of the film continues to grow as the beautiful girl begins to slowly strip off her clothing until she is wearing nothing but a feathered head dress and thigh high black stockings. Seductively, she crawls into the bed and Madison chooses that moment to strike, grabbing the girl and throwing her forcefully onto the mattress!

And this is the exact moment when the films peaks and the downward descent begins.

Though the viewer can’t hear what is being said, due to the background music playing in accompaniment to the opening credits, Madison begins to talk to the girl…and talk…and talk all the way through the opening credits before finally sending her on her way. 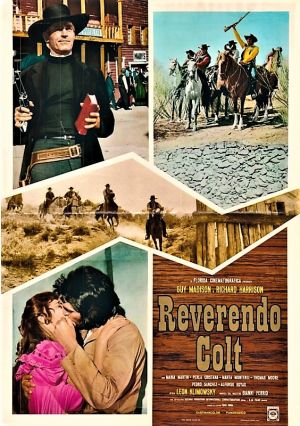 Madison is next seen arriving in the town of Tucson where it is revealed that he is the legendary bounty hunter Miller Colt except, as he informs Sheriff Donovan (Harrison), he has left that life behind and is now a minister who has returned to Tucson simply to build a church. Almost immediately, Donovan leaves town and an army of outlaws, who have been lounging about in the bar and on the streets the entire time, decide to pull off a robbery and shoot the town to pieces.

After the bandits make their escape in plain sight of everyone, the townspeople somehow reach the conclusion that it is Reverend Colt who is responsible and decide to hang him on the spot. Were it not for Sheriff Donovan’s timely return to take him to the safety of the jail, they undoubtedly would have done just that and the film would have mercifully come to an end.

Donovan leads a posse in search of the outlaws but they have disappeared into the desert so he returns to town in a very vile mood until the good reverend shares a plan with him but it is one that is never shared with the audience. The plan must have certainly been fool proof though for the next time Donovan is seen, he is lounging in a chair in front of his office with a smile on his face as he informs the townspeople that, for the time being, there is no need to send out another posse.

As for Reverend Colt, he rides through the desert in search of the outlaws until he encounters a small wagon train under siege from the very outlaws he is attempting to find. After helping them to fend the villains off, Colt leads the group, which includes one of the wounded bandits, toward an abandoned fort and they do find sanctuary there but only after fending off the desperadoes one more time in a desperate run to the fortification’s gate.

As this description demonstrates, the first thirty minutes of this film are painful. They are nothing though compared to the next thirty. 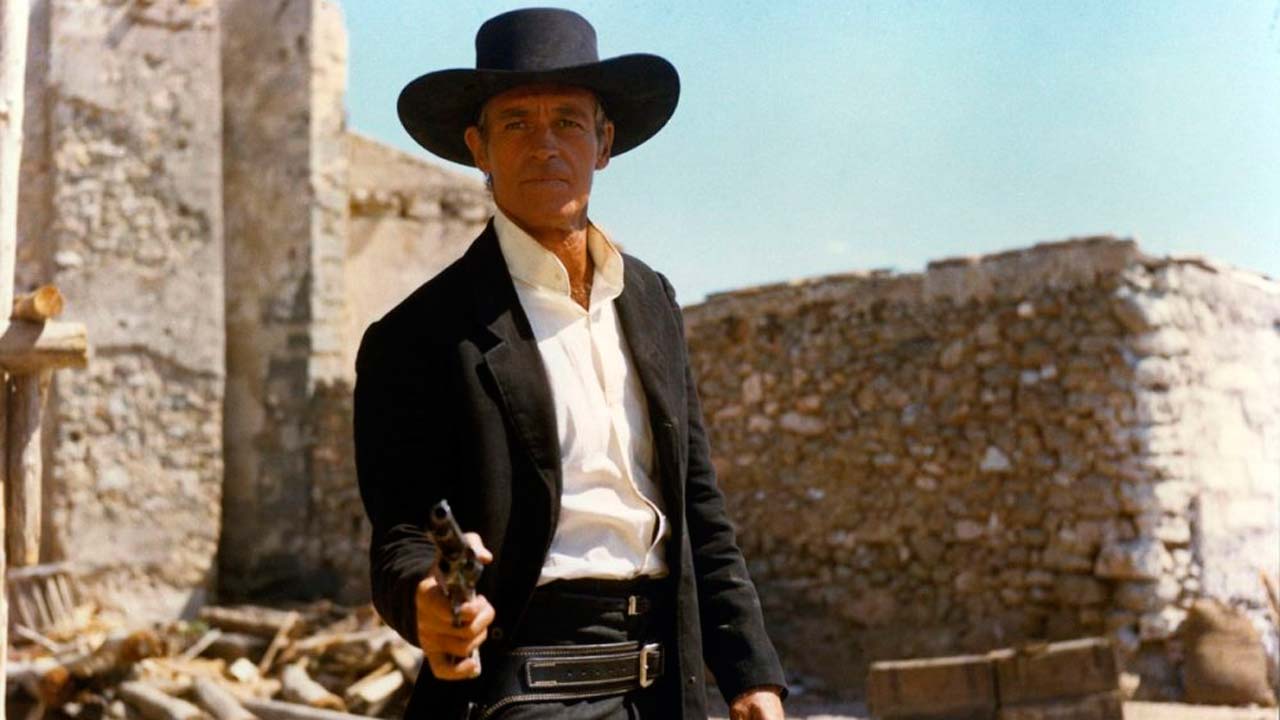 Reverend Colt predominately spends this time doling out words of wisdom and acting as the conscience incarnate for the members of the small wagon train as well as the suddenly reformed wounded outlaw who has abruptly decided to re-think his life choices. Thankfully, he did though as someone had to be around to identify the members of the outlaw gang who continually attempted to sneak into the fort, the most prominent of these being disguised as a “carpetbagger” selling goods out of the back of his wagon. Though the denizens of the fort were in desperate need of water, he assures them this is the one thing he does not possess but he does have dress goods and, despite their perilous state of affairs, he is able to make a sale or two before finally being exposed.

It is then that the leader of the wagon train discovers water in the outlaw’s wagon but just as he is about to quench his thirst, Colt shoots the canteen full of holes. When pressed as to how he could do such a thing, the reverend assures his newfound friends that the water is poisoned as this was undoubtedly the outlaw’s plan to do them in all along. Though his compatriots are eager to accept this explanation as fact, it raises a nagging question.

If the water in the canteen was truly poisoned and the intention had been to poison the people in the fort, then why didn’t the outlaw simply give them the water when he first arrived? He could have made it safely back to the bandit lair in no time at all. 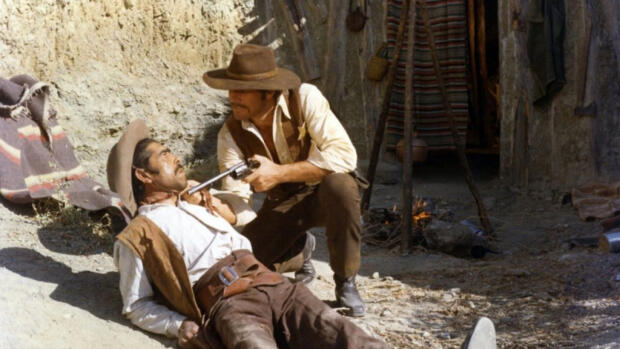 Unfortunately, the film does not improve from there and the conclusion does nothing to compensate for the prior hour. This is not to say that there are not a couple of entertaining elements in this movie and they come in the form of a couple of flashbacks. One of these explains how Colt, the son of a minister, became a bounty hunter and the other how Colt, the bounty hunter, became a minister. The latter in particular contains a Peckinpah-ish element that is particularly well done.

All in all though, this film is a disaster. The dialogue is abysmal and the intentional attempts at humor made throughout are not nearly as funny as the unintentionally humorous moments provided by the plot itself. It is a bit sad that Madison’s final starring role came in such a bad film.

Reverendo Colt in the end probably belongs on a list of the worst spaghetti westerns ever made but there are a couple of ways this film can be made much more enjoyable. The first is to approach it as an unintentional comedy in the vein of Tommy Wiseau’s The Room.

The second is more simple and requires less time. Simply turn it off after the opening scene with the saloon girl.

Retrieved from "https://www.spaghetti-western.net/index.php?title=Reverendo_Colt_review&oldid=134767"
Category:
Cookies help us deliver our services. By using our services, you agree to our use of cookies.