The latest issue of Cinema Retro (issue 26 as a special limited UK import edition) is always a welcome sight but the edition currently hitting the shelves just now has an extra benefit for Spaghetti fans in the shape of an eight page feature from Howard Hughes on The Five Man Army; an American financed Spaghetti Western, shot in Spain and Italy which hoped to cash in on the craze sweeping the film world in the late 1960s. 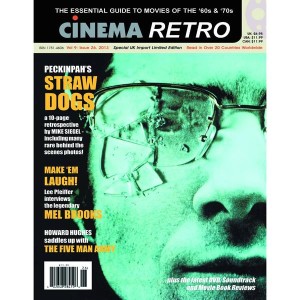 The Five Man Army is a film with a mixed reputation among Spaghetti fans. Its more generous budget meant that it had higher production values than many of its contemporaries and benefited from a first class cast and crew but its American money and influence also, for some, meant it lacks some of the authentic ‘Spaghetti’ feel that we all enjoy. In a way, in attempting to appeal to as wide an audience as possible, its producers wound up leaving its core, niche audience just a little bit unsatisfied. That being said, the film still has some excellent moments and its qualities are such that it is difficult not to enjoy the ride it offers. 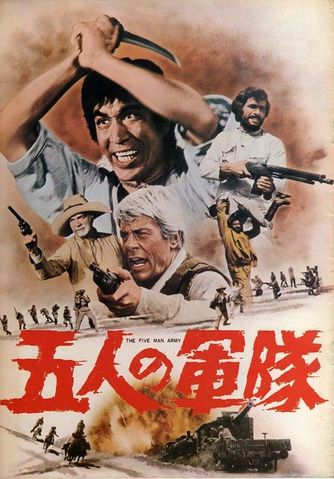 Hughes has done a fine job in digging a little deeper into the background and legacies of this film and shows that, despite its somewhat homogenised formula, it is a film which played a not insignificant part in the creation of one of the genre’s most financially successful and lastingly popular teams. For those familiar with Hughes’ writing the style here will come as no surprise. He intersperses an extensive plot summary with details on the before, during and after of the film’s production; drawing parallels with its influences (The Magnificent Seven, The Guns of Navarone and Mission Impossible) and furnishing information on locations, personnel and release. This is a rewarding and enjoyable approach which offers something for the hardened fan and uninitiated alike. I found the location stuff particularly interesting and learned some detail new to me. There is also some nice data on the film’s various soundtrack releases which should please the Morricone fans (which is pretty much all of us I guess) and some discussion on its similarities with another film co written by Dario Argento, Today It’s Me…Tomorrow You! All in all Hughes has put together a really useful piece and it’s a damn good read to boot. Apart from anything else it has made me keen to watch the film again which can’t be a bad thing.

In case all that wasn’t enough to make you get your copy ordered straight away, this issue of Cinema Retro also features a 12 page special on Peckinpah’s notorious masterpiece, Straw Dogs from Mike Siegel, an interview with Mel Brooks and another article from Hughes on the 60s British war film, Mosquito Squadron. The Straw Dogs feature is excellent, with some great pictures taken on set and some fascinating inside information about the film’s shooting and reception from the British censors.

Like I said at the beginning, a new issue of Cinema Retro is always a good thing but this one, in my opinion, is one of the best and for the cult film geek it’s a must.

Phil is from London, England and is a lifelong Western movie fan in general and Spaghetti Western fan in particular. Phil writes fortnightly reviews of Spaghetti Westerns under the pseudonym Son of Django

Retrieved from "https://www.spaghetti-western.net/index.php?title=Review:_Cinema_Retro’s_feature_on_The_Five_Man_Army&oldid=100897"
Categories:
Cookies help us deliver our services. By using our services, you agree to our use of cookies.