Difference between revisions of "Sabata review by Pete R." 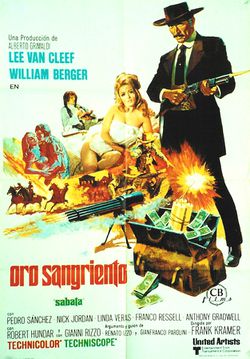 During the heydey of the Spaghetti Western, Lee Van Cleef was one of the biggest stars of the genre. With Sabata, Van Cleef was given a role more similar to that of Clint Eastwood in Leone's Dollars films and what audiences got was a highly entertaining and interesting take on the usual Western story. Director Gianfranco Parolini aka Frank Kramer injected this film with a whole rogues gallery of offbeat Western characters. He also was known to add lots of James Bond-esque gadgetry and acrobatics to his films (see the macaroni combat film Five For Hell). 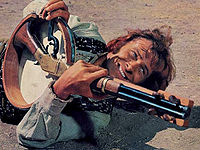 We first meet Sabata after he rides into the town of Dougherty. Meanwhile, a group of thieves are robbing the town bank, making off with the huge metal safe containing $100,000 that they expertly extract by laying down a dolly track with a special pully and sliding the safe right into their wagon. A more streamlined version of the safe heist in For A Few Dollars More, you could say. Sabata walks into the local saloon where a party is going on and this is where we get our first look at his super-precise aim as he throws a coin into the slot of an electric piano. This guy is good! An old aquaintance of Sabata soon shows up. His name is Banjo (William Berger) a sort of wise cracking Terence Hill type character mixed with Harmonica from Once Upon A Time In The West. He's a great foil for Van Cleef in this film. 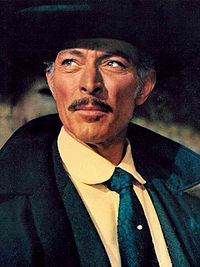 Sabata meets two other characters in town that he takes a liking to: a comical fat guy named Carrincho (Ignazio Spalla) and an acrobatic mute named Alleycat (Nick Jordan) and they become his cohorts. While on the outskirts of town, Sabata manages to hijack the safe back from the robbers (now incognito as Union soldiers) who are a group of acrobats called The Virginian Brothers. Sabata brings the money back to town and is offered a reward of $5,000. What everyone in town doesn't know is that the respected town officials, Stengel (Franco Ressel) and Judge O'Hara (Gianni Rizzo) are behind the actual robbery and Sabata just ruined their plans to buy a large portion of land that will be set aside for the new train coming through. After finally discovering this information, Sabata, Carrincho and Alleycat work together to blackmail Stengel and his army to get the money back. Banjo on the other hand has his own priorities and his actions throw a wrench into the works.

This film has several incredibly cool sequences including a standoff between Banjo and five men. This is where we are introduced to the "banjo gun". You can see this particular idea show up again in Robert Rodriguez's Desperado and Once Upon A Time In Mexico in which machine guns are hidden inside guitar cases. The acrobatic aspect in this film is really interesting because Parolini uses the character of Alleycat to bounce and jump from building to building. The final battle with Sabata, Carrincho and Alleycat Vs. Stengel at his compound is literally explosive!!

Sabata is one of my personal favorite Spaghetti Westerns because it is filled with really interesting and colorful characters and I think Parolini's twists on this already offbeat genre are fresh and fun. Composer Marcello Giamibini's score for Sabata is no doubt influenced by Morricone's work, but it still has a unique flavor that genre fans will appreciate. I feel the Italian Westerns were every bit as exciting and entertaining as the Hollywood Westerns and Sabata is a perfect example of them at their best.