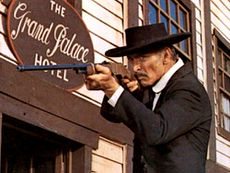 Every now and again something comes along that has no business being wonderful but somehow or other manages to do it with seeming effortlessness. Sabata is a prime example of such an entity.

Its sum parts are decent but by no means over promising. It enjoys a good cast but not one of constant quality, it was made by a competent but by no means highly acclaimed director and it has a score by a composer who is rarely spoken of with the hallowed tones of Morricone or Bacalov. Yet this film is a joy from start to finish and manages to bring out the very best of everyone involved. It never ceases to lift my mood when I watch it, or even think about it if I'm honest, and in my opinion should be available on prescription for anyone suffering from clinical depression. Its theme tune alone is enough to instil a general atmosphere of bonhomie and I have been known to spontaneously instigate a conga line after hearing no more than the opening few bars.

Is there any sense to this?

Not even a little bit. Sabata is no more than a competent caper picture; almost Bondesque with its gadgetry and gimmicks. It has about as much depth as a plastic paddling pool and is far from being the best work of anyone involved. Yet for some indefinable reason it is a treasure of the first magnitude. 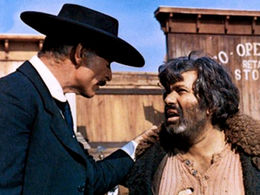 But wait a minute. Maybe the reasons it works are more obvious than it would at first seem. Let's consider the factors. For starters it stars Lee Van Cleef and is made in 1969. The second fact is critical here. Van Cleef appeared in some of the very greatest spaghettis and, in equal quantity, some absolute horrors. But these can be easily separated by decade. Put simply, 1960's good, 1970's bad. The Grand Duel of 1972 is the obvious exception which proves the rule. Apart from that classic all of Van Cleef's 1970's outings are at best poor. Captain Apache, Bad Man's River, God's Gun; all bear witness to Van Cleef's inability to avoid a turkey in the later decade. For a Few Dollars More, The Good the Bad and the Ugly, Day of Anger, The Big Gundown all bear equal witness to his inability to put a foot wrong in the earlier one. By this code Sabata was sure to succeed.

Secondly, Gianfranco Parolini, the film's director, was hot from Sartana (probably his best western) and was yet to become bogged down in the succession of ill advised pastiche pieces which blighted his later work. Thirdly, the film boasted a supporting cast that could always be counted on for good value and who became genre stalwarts as their careers progressed. First among these would be the ever entertaining William Berger whose hippyesque character, Banjo, would act as an ideal foil for Van Cleef's 'gunsight eyed' protagonist. But of equal value is Franco Ressel, the campest bad guy in the west who sported one of the most outrageous comb overs seen on film. Throw in Pedro Sanchez and Gianni Rizzo and things are beginning to build up. Indeed, add all of these elements to the aforementioned jamboree of a music score and we are faced with a veritable cornucopia of genre goodies. What was I thinking before? This film couldn't miss!

Of course there are some who are not swayed by the obvious merits of this film. There are spaghetti fans for who are instantly wary of anything which leans toward the lighter side of angst ridden vengeance: and for good reason. As these films got lighter so, more often than not, they got sillier and less satisfying. Also, as the genre ran its course from stylish action to slapstick comedy, there were a number of examples that were neither one thing nor the other. Yet although it would be fair to say that Sabata falls into the latter category, it never suffers from the 'neither fish nor fowl' syndrome and manages to maintain an admirable balance. A balance which, for me, became the benchmark for all similar fare that followed. So do yourself a favour. Climb aboard the Kitsch express that is Sabata and enjoy the ride!

Retrieved from "https://www.spaghetti-western.net/index.php?title=Sabata_review_by_Phil_H&oldid=97916"
Category:
Cookies help us deliver our services. By using our services, you agree to our use of cookies.