Run Man Run is the third and final western by Sergio Sollima, it's a sequel to the better known The Big Gundown (in French called Colorado). It's more light-hearted in tone and even though Sollima himself calls it his most political movie, it often plays more like a treasure hunt movie. Tomas Milian reprises the role of Cuchillo Sanchez, the knife-wielding Mexican peon. In the course of the movie, he develops from a petty thief into a future revolutionary hero. In jail he encounters a revolutionary poet called Ramirez who asks him to break him out to accompany him to Texas, where he has hidden $300.000, destined for revolutionary practices. Ramirez is killed in a border town, but in his dying moments he has told Cuchillo the whereabouts of the money. Cuchillo now heads for Texas, with the half of Mexico on his trail, including his fiancée Dolores ...

If this sequel is more light-hearted and less complex than Sollima's previous westerns, it's as colourful and entertaining as a movie in this genre can possibly be. Funny, sexy and violent this is a lovely pudding of western.

Video & Audio : The film is presented in its intended aspect ratio and generally looks great. The print is a bit grainy but colors are strong and the image is reasonably sharp. Contrast rates drop a on a few occasions, and some scenes look a bit hazy, especially near the end (see screenshot 5). I also spotted some (very) minor ghosting effects, but that's nothing to worry about: apart from these (brief) hazy moments, this is a good transfer, nearly entirely free from the horrible dnr-effects that have spoiled several recent DVD and Blu-ray releases. Both audio tracks have a reduced bitrate of 192 kb/sec, but this doesn't seem to cause any real problems. It's impossible to change between tracks on-line, you'll have to go back to the menu to pick another track. Dialogue is understandable on both tracks, but I found the sound of the French track a bit 'warmer'. There are a few lip-synch problems, but that's all very minor. Again: no real complaints here. For some obscure reason, the film is called Saludos Hombres in French.

The Extras : The disc offers no less than ten trailers of spaghetti westerns released by the company. There all in good condition but offer only French audio (and no subtitles). More important is the interview with film maker Sergio Sollima from 2007. Sollima speaks French but turns to Italian on a couple of occasions and sometimes uses Italian words in French phrases; he also makes a couple of mistakes in French. Anyway, all his lines - even the French - are subtitled in French. It's a very interesting interview. Sollima speaks about his war memories, when he was a partisan while his girlfriend's father was a fascist. It nearly cost him his life and it changed his moral outlook. He talks about leone, who was a good friend and also the one who introduced him to producer Grimaldi. According to Sollima, Leone originally preferred Sollima's westerns to his own, but later, when he had become world famous, he used to say that Sollima had been influenced by the dollar movies. Milian is described as a very talented but capricious actor. When they first met, Sollima told him to forget all about method acting and watched a few films starring Toshiro Mifune with him. It was decided to give Cuchillo a knife instead of a gun, because a knife was considered to be 'a poor man's gun'. Apparently Milian and Volonté hated each other and even had a real fight on the set of Faccia a Faccia. 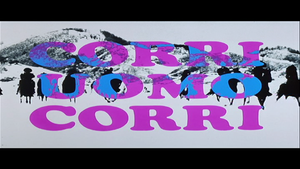 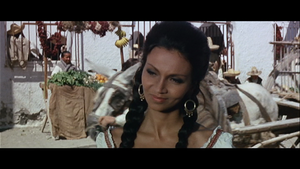 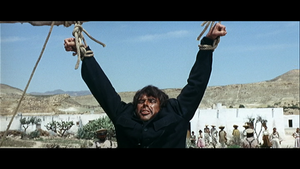 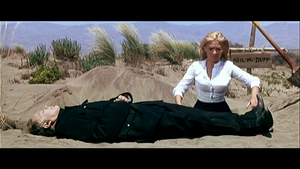 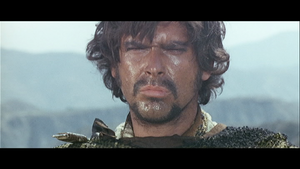 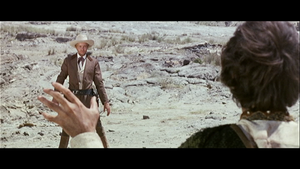