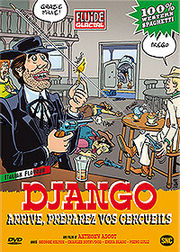 Not for the first time in his career Sartana witnesses an attack on a gold shipment and finds out there’s something completely rotten in the Italian West: instead of gold, a load of sand was transported (and supposed to be robbed). Intrigued, Sartana travels to the mining town of Apalusa and soon finds out that the local representative of the Mining company, Spencer, is conspiring with the Mexican bandit Mantras to pinch the gold. Sartana makes a bargain with Spencer but also makes arrangements with the beautiful saloon owner Trixie, who’s also interested in the gold. Meanwhile another gunman, called Sabbath, has arrived in town. Spencer tries to play him and Sartana off against each other, but is eliminated by Mantas, who is, at his turn, eliminated by Sartana. If you think things will be settled in a simple shootout between Sartana and Sabbath, you’ve never seen a Sartana movie before. What about this beautiful Trixie? Or the mine workers?

They really created a confusion of Babylonic proportions with this entry. Hilton takes over from Gianni Garko, and does a decent job, but many fans of the series felt he was too gentle, too much Halelujah to be Sartana. In France, on the contrary, they thought he was mean enough to be Django. The Sartanas with Garko had always been tongue-in-cheek, but this movie shows a tendency towards the absurd. A good example is the opening scene, with Sartana preventing an explosion (and the bandits from destroying evidence) by throwing his water canteen above the burning fuse and then shooting a hole in it so the water can extinguish the fuse! Otherwise the movie qualifies rather well for the series. There are twists and double-crosses a go-go and Sartana tricks out his opponents with a variety of tricks with his Derringer, his boots and three loaves of bread. I’m am not kidding. Erika Blanc is tantalizingly sexy, Pazzafini and Lulli are fine spaghetti western villains, and Southwood is very good as the white suited, parasol wielding, poetry reading, effeminate, but lethal sharpshooter. A lightweight, but pleasant movie.

Not completely surprising, the cover design by Fluide Glacial of this French release provoked more comments than any other aspect; most people called it weird, goofy, boozy or simply a crackpot idea. It would be a pity if all these comments would distract from the actual DVD, because it is very good. The film is presented in its original aspect ratio of 2,35:1 and the anamorphic image is nearly in pristine state. Nearly, because in some sequences there are a few persistent hairs at the top or bottom of the image. Contrast rates and black levels are excellent, while colours are truly vibrant. There are two language tracks, Italian and French; they’re both fine, but dialogue is a bit louder in the French dub. There are French subtitles for the Italian track; they’re optional, but cannot be removed on-line: you’ll have to choose the Italian language track either with or without subtitles from the menu. It’s also not possible to switch between the audio tracks while watching the movie. There are no extras other than a series of trailers from other spaghetti western releases from the same company. As far as the trailer of this movie is concerned, you can either choose French or Italian audio (with French subs), the other trailers are in French only.