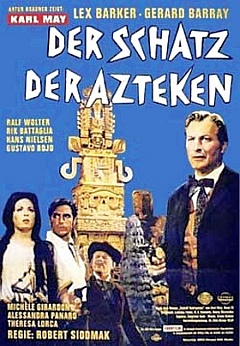 In Maximilian times, a German physician, Dr. Sternau, is asked by the American president to deliver a message to general Juarez, the leader of the rebels. The German saves the life of an Aztec princess, and is in return saved by her, after he accidently has seen the lost treasure of the Aztecs, and the girl’s father wants to kill him for this reason. Sternau’s work is thwarted by the corrupt officer Verdoja, who wants to lay his hands on the treasure.

This is the first part of a two-part movie based on novels by Karl may, set in Mexico. Some might be tempted to think it’s a forerunner of the Zapata movies, but the tone is radically different here. Ralf Wolter, who plays Sam Hawkens in the Winnetou movies, has a nice cameo as a man who sells cuckoo-clocks to the Mexicans ! - Scherpschutter

Followed by Pyramid of the Sun God