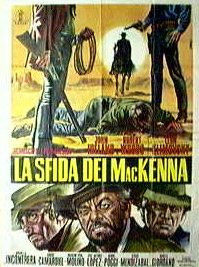 A former priest becomes embroiled in the drama raging between a Mexican rancher, his unhappy daughter and psychotic son whilst dealing with his own issues of guilt and a loss of faith. A new relationship with the local brothel keeper seems to offer a fresh start but the rancher and his son are set on making him pay for his interference and his own inner demons are never far away.

Hollywood's John Ireland tops the cast of the Italian spaghetti western, The Challenge of the McKennas. The hero is a former priest, who feels he has lost the calling. Most of the deadly sins are trotted out during the ensuing drama, and several commandments broken, but good triumphs over evil and the Lord works in mysterious ways. Placing this film head-and-shoulders over most of its genre are the three-dimensional performances of the actors and a solid screenplay. Challenge of the McKennas is also known as Badlands Drifter.

Retrieved from "https://www.spaghetti-western.net/index.php?title=Sfida_dei_MacKenna,_La&oldid=132189"
Categories:
Cookies help us deliver our services. By using our services, you agree to our use of cookies.