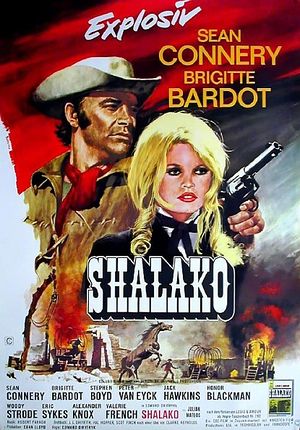 Shalako was shot in the Almeria surroundings, the homeland of the spaghetti westerns. It stars no other than James Bond himself alongside B.B., Brigitte Bardot. It was clearly Connery's movie: he received over 1 million $ out of the 5 million $ budget and brought two Bond collaborators with him, director of photography Ted Moore and stunt coordinator Bob Simmons. Honor Blackman also had a history in the Bond franchise: she had played the infamous Pussy Galore in Goldfinger.

In spite of the Spanish locations it doesn’t really feel like a spaghetti western, but it’s more violent (at least more graphically violent) than most of them. There’s one scene including a necklace (you’ll recognize it when you see it) that is particularly gruesome. The premise is intruiging: a party of European aristocrats are on a hunting party in New Mexico in the 1880’s. They’re travelling full equipage, including silver cutlery, vintage wines, butlers, maids, side-whiskers and frizzled moustaches. There’s even a countess called Irina Lazaar, played by Brigitte Bardot herself. The company is threatened by hostile Apaches and duped by the treacherous guide, who’s after their jewelry (and Honor Blackman's pussy galore). Luckily there’s a U.S. army scout to save them.

The action scenes are well-handled and often quite exciting, partly because the Spanish gypsies who were hired to perform the Indian attacks were acting over-enthusiastically. Producer Loyd had cast real Native Americans as Apaches, but the ones who turned up were overweight, so he hired these Spanish gypsies instead, leading to a series of incidents with actors and actresses complaining about the Spanish Indians charging in such a furious style that people felt really menaced (!). Connery is clearly not in his element in a western setting, but the supporting actors are well-cast: Van Eyk and Hawkins are very convincing as, respectively, an arrogant and a more concerned member of the European nobility, and Eric Sykes is very funny as the butler. Casting good old Woody Strode as an Indian was quite a daring thing (an African American as a Native American?!), but the part probably launched his career in European westerns, which would turn him into one of the most famous people in film history waiting for a train.

Overal Shalako is a watchable movie with some good action moments, but it moves at a rather slow pace, especially during the second half of the movie. Allegedly Connery and Bardot didn’t get along very well and Bardot had to learn her lines phonetically because she didn't speak Zee English ferry well. Edward Dmytrick’s direction is adequate but we would’ve expected a bit more from the man who brought us Warlock and Broken Lance (he was sixty at the time and probably not really interested in the project). The film is also marred by a rather abrupt conclusion and particularly silly theme song. Two other movies were being filmed on virtually the same locations around Almeria, the spaghetti western May God forgive you … I won’t! (B.B. causing much excitement among the Italian stallions) and the British war movie Play Dirty (one film crew had to remove tyre tracks, the other had to remove the horse droppings before filming). One day the 'Indians' misinterpreted an indication of the director, and charged a British tank instead of the camp. 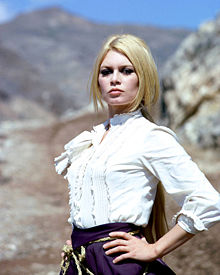 Simon Gelten is a long time contributor to the SWDb. "I'm not as old as Tom B. but I'm working on it. I hope to catch up with him by the end of the next decade.", he says. Simon saw all movies by Sergio Leone and several by Sergio Corbucci in cinema, most of the time in Eindhoven, the city where he was born. Currently, Simon is living in Turnhout, Belgium. Simon is active within the database as both Scherpschutter and his alter ego Tiratore Scelto.
Retrieved from "https://www.spaghetti-western.net/index.php?title=Shalako_Review&oldid=115788"
Category: