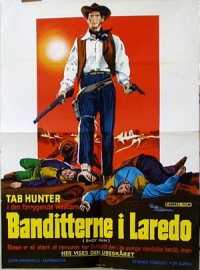 When revenge is the name of the game, moral dilemma's are no longer important. That's what Roberto Mauri's La Vendetta è mio Perdono makes clear. The avenging Angel is called Django in the German version I watched. Along with her parents, Django's bride to be is slaughtered mercilessly during a brutal robbery. In a nice reference to For a few Dollars more, Django finds a watch that plays a tune. The chimes will put him on the trail of the killers. And like the title says, nobody will be pardoned: revenge is this guy's pardon, after all he's called Django (at least in German).

In the US this film was called - a bit simplistically - Shotgun. Tab Hunter, who "came out" in 2005, is our Django of service, and honestly, he doesn't look too effeminate for the part really. But this impression may be caused by the fact that his Django is a quite effective killer: he hangs one of his opponents and sets another literally on fire! Even the woman who helps him, and has a crush on him, is executed mercilessly because she recognizes the tune of the chimes. It will be clear that plot-wise this film is pretty straightforward. Still it offers a bit more than your average spaghetti western. Usually it takes an above-average cast to get an above-average movie, but the prolific Mauri proves that he can manage without it. Or could this be due to Franco Delli Colli, who also was director of photography for the cult hit Django Kill! ? The score by Giancarlo Rizzi (his only one by the way!) is very good too. All in all this is a tough and violent film, with a good sense of humour too, that has enough action and excitement to keep you interested. But few people have seen this it, and those who have, usually were not very positive about it. I think the film doesn't deserve all this negativism. Of course it's not a masterpiece, but you'll certainly be entertained. You can take my word on it.

This "coming out" of Tab Hunter is in fact quite funny. He apparently was an idol in those days and actress Erika Blank confessed afterwards that she had been in love with him for years. As a teenager she had covered the walls of her bedroom with his photos! But all dreams and fantasies were ruined when she met him: he had an unnatural voice, very effeminate and unattractive. I suppose he was dubbed in most movies, not only in Italy, but in Hollywood too.