By and large three historical events were important for the history of the spaghetti western:

I‘ll try to describe these events in such a way that even those people who have only a vague idea of Italian culture and history will be able to understand what it’s all about. 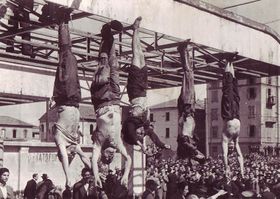 When we talk about Italy’s World War II history, there are two things we must bear in mind:

a) Italy fought on the ‘losing side’ during World War II

Most Italians felt humiliated and this is reflected in many spaghetti westerns that have a Civil War background. Italian directors often use the American Civil War as a substitute for World War II; many spaghetti westerns are set in the aftermath of the Civil War and are often concerned with people trying to build a new life in a post-war society. The protagonist might well be a Southerner who is released from a POW camp.

Italy’s part in WW II is rather limited. Mussolini didn’t have the military power of Hitler’s Third Reich and his main achievement probably was the conquest of Ethiopia. Most of his other exploits were failures. He invaded Greece but was soon forced to withdraw. His forces were beaten several times in North Africa, and could only be saved by the German forces led by Erwin Rommel. Soon after Italy was invaded, in June ’43, Mussolini was arrested. But Germany invaded the country, Mussolini was re-installed, and Italy became a battlefield. In the Nazi-occupied northern part of the country a fascist state under Mussolini was founded, with the small town of Salo (near the Garda Lake) as capital. A bloody Civil War that lasted two years broke out. Italian partisans and other civilian forces fought against fascist troops. Finally the fascists were beaten: Mussolini was arrested when he tried to flee the country and killed in April 1945; his corpse was shown, along with that of his mistress and several fellow fascists, hanging upside down, in the streets of Milan.

The list of westerns set in the aftermath of the Civil War is long. Some of the first spaghetti westerns, like One Silver Dollar (1965) and Return of Ringo (1965), and some of the last, like Keoma (1976) and California (1977) are cast in this mould. Even milestone movies like Django (1966) and The Good, the Bad and the Ugly (1966) have a Civil War background, although their specific subtext is different from the above-mentioned movies. 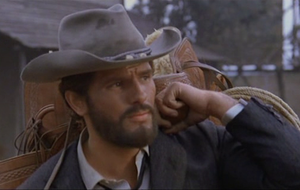 Giuliano Gemma in One Silver Dollar

As said, the protagonist of a typical spaghetti western set in the aftermath of the Civil War, often is a noble Southerner, defeated and humiliated, but unbroken; he tries to take up his life in the post-war society but has to fight for his land and family against vindictive Northerners or corrupt businessmen who terrorize the surroundings. In One Silver Dollar Giuliano Gemma must accept ‘dirty jobs’ in order to survive and accidentally kills his brother, a very clear reference to the theme of ‘Italians fighting against Italians’. In the ambitious Johnny Hamlet (1968) the theme of the war veteran coming home is linked to Shakespeare’s immortal tale Hamlet. In The Hellbenders (1967) another theme is treated: that of the renegade Southern officer who refuses to give up the fight. Cotton and his family dream of reviving their ideas in a kind of ‘Southern Empire’ ; they want to found this empire somewhere ‘up North’ with the help of stolen Union money. It’s a very dark, pessimistic film with some vague references to Mussolini’s Empire in North Italy during the last stages of WW II.

Although the protagonist usually is a Southerner, this is not necessarily so. The Ringo character in Return of Ringo, often considered to be the best film of this type, is a Northerner. Django, the mysterious avenger whose family was killed when he was ‘far away’, is a Northerner too. While Ringo has to deal with Mexican bandits who have annexed his possessions (and family!), Django opposes a renegade Southern officer, a Ku Klux Klan inspired racist whose men wear red instead of white caps and who hates Mexicans instead of blacks.

Some of the films have a more ‘peaceful’ message, talk more about reconciliation and fraternity: in Fort Yuma Gold (1966) Giuliano Gemma – the actor most identified with this type of movies - must try to prevent a massacre when some renegades threaten to attack the fort from the title, even though the war is over. Quite on the contrary, in films like I want him Dead (1968) and Kill them all and come back Alone (1968) there are few noble thoughts left; the anti-heroes’ actions, if legal at all, come close to pure brigandage. 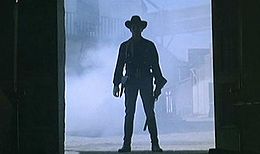 Back from the war: Return of Ringo

II – THE RISE OF LEFT-WING POLITICS IN POST-WAR ITALY

During those last stages of the war, when Mussolini had founded his Empire in the North, Italian communist partisans fought side by side with their fellow Italians against Mussolini and his black coats. After the war, and after a short period of cooperation and strong feelings of togetherness, Christian-democratic leader De Gaspari formed a right-wing government that would embark on a strong pro-American (and anti-communist) course. De Gaspari’s decision to accept American help (Marshall Plan) to build up the country and to leave the communists out of his government, was felt by many left-wing intellectuals as betrayal and created strong feelings of disillusion among them. Added to the fact that the Catholic Church had not been very courageous during WW II, many Italian intellectuals developed strong anti-American and anti-Catholic feelings. They would be reflected in many films made in the sixties, among them many spaghetti westerns.

One of the most illustrious names of post-war, left-wing Italian cinema is that of screenwriter Franco Solinas. He wrote the script for the Oscar winning (non-western) La Battaglia di Algeri (The battle of Algiers), and was responsible for the scripts of two of the most influential political spaghetti westerns, The Big Gundown and Quién Sabe ? 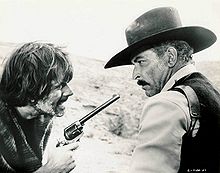 In Sergio Sollima’s The Big Gundown (1967), bounty hunter Lee van Cleef has done so much for peace in the state of Texas (he has killed nearly all criminals!) that he has become popular among local dignitaries, who offer him a more respectable job – in politics. But first they ask him to catch an outlaw, a young farmer, who allegedly has raped and killed the daughter of a rich land owner. Trailing him, he starts having doubts about the guilt of the young man, and finally he must make a choice between the innocent poor man and the guilty rich people, who pay him and who can help him with his new career (a ‘choice of classes’). In Face to Face a college professor travels south (because of his bad health) and discovers his violent instincts when he is kidnapped by a bandit. The professor is played by the actor and left-wing activist Gian-Maria Volonté, and in one of his speeches, he seems to explain the 'dialects of history and revolution': "One violent soul is just an outlaw, a hundred are a gang but they're an army at a hundred thousand, that is the point. Beyond the confines that limit the outlaw and individual criminal, violence by masses of men is called history." Apparently Volonté and American-Cuban actor Tomas Milian (who had bad experiences with communism) repeatedly had political discussions on the set. The theme of the bounty hunter as a ruthless killer paid by the rich returns in Sergio Corbucci’s masterpiece The Great Silence (1968), one of the very best, but also one of the most depressing westerns ever made. The Specialists (1969), also by Corbucci, is about the bourgeoisie playing judge, jury and executioner (all at the same time) when they hang an innocent man, accused of robbery. They are shown as nearly insensitive but react upset when the protagonist burns their money. In Django Kill! (Se sei vivo … spara!), by Giulio Questi, a former partisan, Mussolini’s black coats are ridiculed by referring to them as a bunch of homosexual muchachos, while capitalist forces, devouring each other, are represented by two businessmen falling out when dividing the money they have stolen from bandits. The political subtext is less obvious here, seems to play second fiddle to the visual audacity. It’s by far the most outrageous spaghetti western ever made, a near surrealistic blend of horror, comedy and western.

Retrieved from "https://www.spaghetti-western.net/index.php?title=Spaghetti_Westerns_and_Politics&oldid=113407"
Category:
Cookies help us deliver our services. By using our services, you agree to our use of cookies.