Difference between revisions of "Starblack" 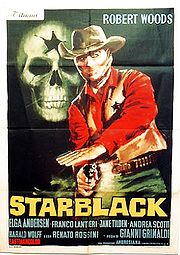 Starblack is a hero who dresses in black and his face is covered by a black scarf and he carries in his shirt a black star, which he always leaves at the scene of his enterprises, as a symbol of justice. A lot of good SW action and old serial flavour... and Robert Woods really sings.- António R.

Starblack is a rather old fashioned looking adventure yarn, which could also had been filmed 10 years earlier. Only the SW typical violence points at 1966, the year of its release. The simplicity of the film is remarkable and in odds with several of the violent outbursts in the action scenes. But Giovanni Grimaldi's directing is often done with a refreshing verve, and makes the film in defiance of the general naivety quite entertaining.